Nigeria’s President, Muhammadu Buhari on Thursday presented before a joint session of the National Assembly a ₦13.08 trillion 2021 budget estimates for approval.

The President in his presentation of the budget estimates, which he tagged: “Budget of economic recovery and resilience,” explained that the main thrust of the document was to complete as many ongoing projects as possible.

Buhari emphasised that priority is giving to projects that directly affect the lives of Nigerians.

Further in his presentation, the President stated that the 2021 budget would drive the MDAs to generate revenue, no matter how little.

He appealed to the legislature to pay attention to the revenue as much as they did to the expenditure, saying the 2021 budget was the roadmap for post-coronavirus economy and was aimed at accelerating the economic recovery process.

On crude oil projection, Buhari put the figure at $40bpd. He also projected the exchange rate at N379 to $1, GDP at three percent and inflation rate at 11.95 per cent.

He disclosed that for consideration and passage, he had directed the Minister of Finance to finalise the Finance Bill and transmit accordingly.

For the Social Investment Programmes, ₦420 billion has been earmarked, while the Social Housing Programmes been allocated ₦20 billion. 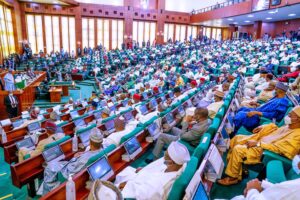 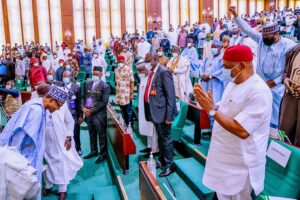 Condolences Pour in For Late Emir of Zazzau