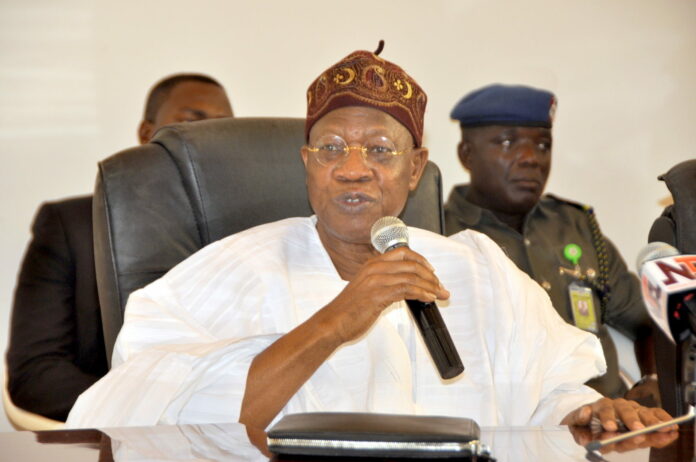 Minister of Information and Culture, Lai Mohammed, Sunday joined the fray to market the credentials of President Muhammadu Buhari, but berated the administration of former president Olusegun Obasanjo and other critcs, saying their reckless elocution could not foster peace and unity in Nigeria.

The minister said it’s a cruel irony that those who frittered away a great opportunity to put Nigeria on a sound socio-economic footing, at a time of financial buoyancy, and those who planted the seed of the insecurity in some parts of the country today, are the same ones pointing an accusing finger at a reformist government of Buhari.

He noted that Buhari’s assumption of office in 2015 prevented Nigeria from becoming a failed state, after a long stretch of rapacious and rudderless leadership.

Mohammed, in a statement in Abuja, said Buhari came into office at a time that a swathe of the country’s territory was under occupation, a period when many Nigerian towns and cities, including the capital city of Abuja, were a playground for insurgents and a moment that the nation’s wealth had been looted dry, with little or nothing to show for the nation’s huge earnings, especially in the area of infrastructure.

According to him, “In one of the most difficult moments in the nation’s history, Nigeria is fortunate to have at the helm a leader who is not only dedicated, selfless and patriotic, but one who is globally acknowledged for his discipline, integrity and vision. Those who genuinely love Nigeria will support, rather than subvert, this committed leadership.

“Nigeria today faces a lot of challenges. But whatever situation the country has found itself in, things would have been much worse but for the deft management of resources, unprecedented fight against corruption, determined battle against insurgency and banditry as well as the abiding courage of Mr. President in piloting the ship of state.

”Nigeria today is not a failed state, but a nation that is courageously tackling its challenges and building a solid infrastructure that will serve as the basis for socio-economic development, a nation that is unrelenting in battling insecurity and working hard to ensure greatest prosperity for the greatest number of people.”

He said no government in the history of the country has done so much with so little, as the Buhari administration is doing presently, adding that with 60 per cent less national income, the administration is making progress on all fronts and setting the country on the path of sustainable growth and development.

The minister said while naysayers are hyping the instances of insecurity in the country, they have conveniently forgotten that the country could have been overrun by insurgents and bandits if Buhari had not rallied regional and international allies to tackle, headlong, the Boko Haram insurgency that saw bombs going off like firecrackers before his assumption of office, and an estimated 20,000 square miles of the nation’s territory occupied by insurgents.

”They tout the downturn in economic fortunes without putting things in context. With the COVID-19 pandemic forcing a global shutdown and a drastic fall in global oil demand, Nigeria lost 60 per cent of its earnings, yet the administration has ensured that not a single worker has been retrenched, has paid salaries as and when due and has continued to build infrastructures like roads, rails, bridges and power, among others, that will serve many generations.

”They aggravate the national fault lines with their angry and unguarded actions and rhetoric, forgetting that while national fissures are amplified at a time of dwindling economic fortunes, what is needed to foster peace and unity is not reckless elocution but responsible and responsive leadership, the kind being offered by President Buhari,” he said.

Mohammed said Nigeria is on the road to greatness, despite the challenges confronting the nation, citing the hard push towards food sufficiency; the modernisation of the rail system; the nationwide construction of roads and bridges; the reform in the oil and gas
sector; the unprecedented anti-corruption battle, the diversification of the economy and the renewed effort to ensure a steady power supply, anchored on a three-phase project that is expected to deliver 25,000MW of electricity in the next few years.

The minister thanked Nigerians for their perseverance and understanding, especially against the backdrop of the stifling effects of the COVID-19 pandemic on the economy, and appealed to them to continue to support the administration, as it seeks to lift 100 million people out of poverty in the next 10 years.