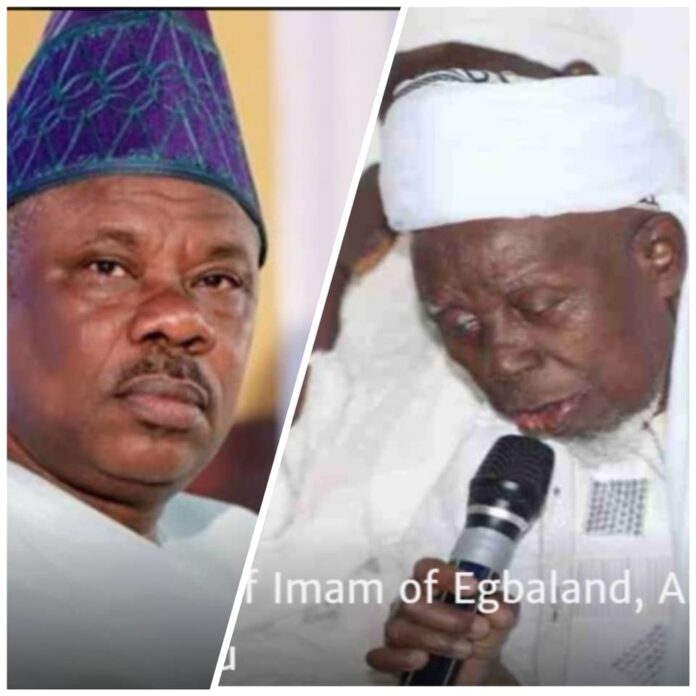 The immediate past Governor of Ogun State, who now represents Ogun Central Senatorial District at the red chamber, Senator Ibikunle Amosun has commiserated with the family of late Alhaji Liadi Orunsolu who was until his death in the early hours of Tuesday, the President-General, League of Imams and Alfas in Ogun State.

Senator Amosun in company of a former Minister for Mines and Steel Development, Sarafa Tunji Ishola and a former member of the Ogun State House of Assembly, Hon. Idowu Olowofuja visited the Orunsolu’s compound around 8:30am.

The former Governor who described the death of Alhaji Orunsolu as painful noted that: “Egbaland, in particular, and Ogun State in general, have lost a respected religious leader and a renowned Islamic scholar.“The Chief Imam was an erudite Islamic scholar who was well versed in Islamic Religious Knowledge. He was a symbol of unity who rallied the Ummah in Egbaland as one indivisible entity during his lifetime.

“Alhaji Orunsolu maintained effective leadership as the Chief Imam of Egbaland and President of League of Imams and Alfas in Ogun State, whilst also provided wise counsel to the entire Rabittah in the entire Yoruba land, Edo and Delta States” Senator Amosun stated.

In his words of consolation and wish for the family and the entire Muslim Ummah, the fortitude to bear the irreparable loss, Senator Amosun prayed that “the Almighty Allah (SWT) will grant Imam Liadi Orunsolu Aljannah Firdaus”.

A Nigerian billionaire, founder and Chairman of Akande International Corporation (AIC), Harry Akande is dead. Akande, who was 77 and until his death a Chief...

The Nigerian Presidency has dismissed a document that purportedly reveals a sum of ₦12,500,000 was transferred to President Muhammadu Buhari from the coffers of...