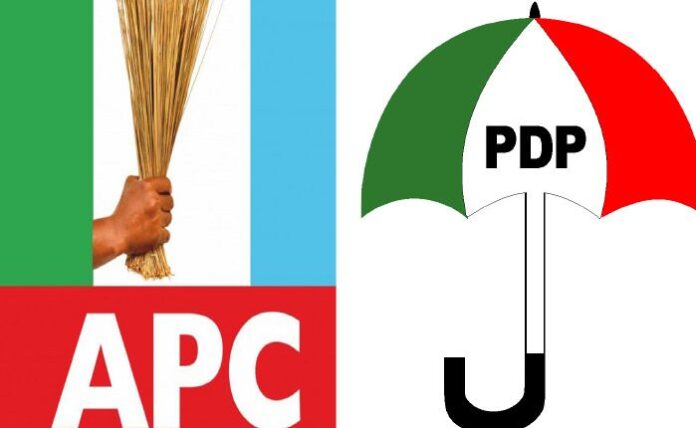 This was coming as the Peoples Democratic Party (PDP) berated President Muhammadu Buhari for violating his oath of office by using the Federal Executive Council (FEC) Chambers and government resources to conduct the affairs of his party.

NWC, in a statement by the factional Acting National Chairman, Hillard Eta, and the Acting National Secretary, Waziri Bulama, explained that they were consulting their lawyers and other stakeholders on the dissolution of NWC and other decisions taken at the NEC meeting on Thursday.

They insisted that the NEC meeting was illegally convened by the suspended Deputy National Secretary of the party, Victor Giadom.

Giadom’s NEC meeting attended by Buhari, among others dissolved the 18-member NWC and other decisions.

“The National Working Committee of the All Progressives Congress wishes to reiterate its earlier position that Chief Victor Giadom has no authority whatsoever to convene a meeting of the National Executive Committee of our great party.

“Article 25(b) of the constitution of the APC is explicit that only the National Chairman or the National Working Committee is given the prerogative of summoning meetings of the National Executive Committee of the party either for statutory quarterly meetings or for emergency meetings. The same provision of the constitution makes it compulsory for a notice of minimum of 14 days in respect of statutory quarterly meetings and seven days in respect of emergency meetings.

“We note that Chief Victor Giadom had convened and conducted a virtual meeting purportedly to be a National Executive Committee meeting of our party wherein certain far-reaching resolutions were purportedly reached. While the National Working Committee is studying the unfolding drama, it will be consulting with stakeholders and team of lawyers on the next line of action.

“Therefore, all members of our great party and concerned Nigerians are urged to remain calm pending the outcome of the consultations.”

Meanwhile, PDP has condemned the use of public facilities by the President to host the NEC meeting, saying it’s the height of corruption.

“Our party describes this action of Mr. President, in using public facilities and resources for APC’s National Executive Committee (NEC) meeting, as the height of corruption as well as a desecration of the sanctity of the seat of power and our national values,” the opposition party said.

PDP added that “never in the history of our nation has governance been so devalued to the extent of using the hallowed chamber of the highest executive body in the country, where high-level executive decisions are taken, for an illegal, wrongly constituted and Nicodemus meeting of a political party.”

The party said: “This shameful development is a further manifestation of the level of impunity, recklessness, disrespect for rules and disdain for our laws by the APC administration, whose latest action exposes a move towards instituting the art of running processes and programmes through illegality, illicitness, illegitimate and unlawful means driven by crude force and naked power.

“Furthermore, it is an indefensible double standard for President Buhari, whose administration has been hounding and prosecuting innocent Nigerians for allegedly using public resources for activities of their political parties, to use the resources and facilities of the FEC chamber for his party’s NEC meeting.

“It is even more distressing that the Attorney General of the Federation (AGF), Abubakar Malami, is part of this desecration of the 1999 Constitution (as amended) by functioning as a notary public to a political party and using official facilities of FEC chamber to administer oath of office to a functionary of a political party, in total disregard to his oath of office, the code of conduct prohibitions under the 5th Schedule and extant public service rules.

“This is the same Attorney General, who has been prosecuting others for alleged but unsubstantiated use of public resources for  activities of their political parties.”

PDP noted that by using government facilities and resources to promote the activities of his party, the Attorney General has become culpable of the same offence for which he has been prosecuting innocent Nigerians.

“Malami has therefore become ethically challenged to continue in office as the Chief Law Officer of our nation.

“It is even more disgraceful that the furtive APC NEC meeting at the FEC Chamber was convened in total violation of the APC Constitution, which prescribes 14 days notice for regular NEC meeting and 7 days notice in the case of an emergency meeting under Article 25 (b) (i) and (ii) respectively.

“Such a coup against their own party’s constitution renders the purported APC NEC meeting illegal and decisions taken therein, a complete nullity.

“Significantly, the kind of marshal orders and threats which President Buhari was issuing out at the so called NEC meeting without allowing for a debate was a sad reminder of his days at the Supreme Military Council in 1984.

“This raised questions on the democratic content of the charade called a NEC meeting by the APC.

The party, in a statement by its National Publicity Secretary, Kola Ologbondiyan, counseled APC leaders to note that “Nigeria is a nation governed by law and as such their party will not be allowed to use their crisis to destroy our democratic order.”