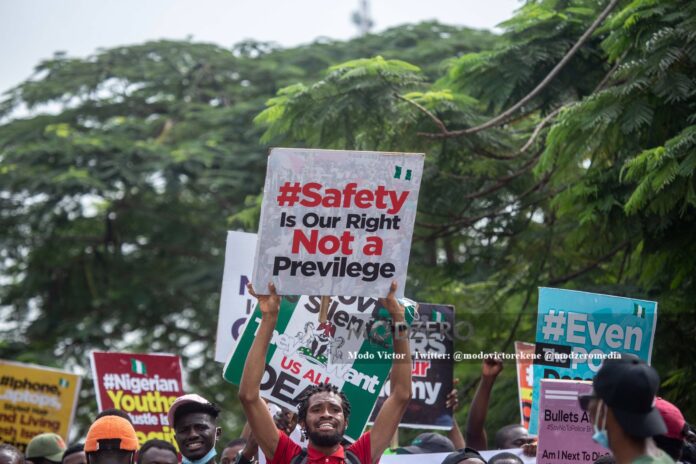 From the statement of the inspector general of police, Mr. Mohammed Adamu, SARS will come back very soon in another name. Meaning there will be a change in nomenclature, but police extortion and brutality remain intact; because it serves many purposes for the system or the state/government, police force and police officers. For the government, the specialized branch is the evidence that it is working against violent crimes. For the police force and its officers, it is a means to an end of gaining wealth through extortion of both criminals and innocent citizens. As usual, it appears the #EndSARS won the battle, but the state and the police won the war. Aluta continua!

The justification for the forerunner of SARS, SARS and successor of SARS will remain the need to arrest the unending occurrence of violent crimes like armed robbery, kidnapping, ritual killings, etc in the country. There’s always a need for a special or specialized branch of the police force for this endemic crisis. Each time, the specialized branch ends up becoming an organized crime on its own, albeit, a legal one, armed by the state to rob and maim the innocent populace.

The root of the crimes that necessitates the specialized branch is the same. Their root is poverty, resulting from unemployment, mismanagement and corruption by government, the political class and the civil servants. Mismanagement and corruption that take the lead in engendering unemployment and crimes are products of how the state organizes primarily the economic and the ensuing political systems.

The vicious cycle runs thus: the people are poor because they don’t have jobs or sustainable means of livelihood. They don’t have jobs, not because they don’t want to work but because, government, the policy maker hasn’t put forward policies or framework that lead to jobs being created by the appropriate job creators, namely, firms and households. The economic activities of households and firms, through effective government policies lead to employment of resources, including that of labour.

In Nigeria, the government has remained derelict in its duty of fashioning appropriate policy. At the same time over the years, its officials are busy helping themselves with the resources of state that are supposed to support policies in actualizing prosperity for all. We thus have double jeopardy of government dereliction of duty and corruption aiding and abetting unemployment and crimes by criminals, police, customs, immigration, military and paramilitary.

Meanwhile, Nigerians are made to carry all the yokes of both criminals and state agents as criminals. Armed robbers, kidnappers, ritual killers and spiritual robbers and the state agents concurrently attack, steal and destroy Nigerians mercilessly.

A Third Jeopardy arises to Nigerians whenever they revolt against the unholy alliance and oppression by criminals and state criminals. They are killed by the police, representing the state to put down the revolt. But the reality in this case is, the police is both defending the derelict government and their loots and means of continuous stealing from the people they are supposed to be protecting.

The issues of safety from criminals and extortionist SARS men and women and state agents generally are far beyond SARS. The inspector general of police has already informed that SARS will be back in another name. Its mission and operations, which is to kill, steal and destroy will remain the same. As long as Nigeria remains a unitary state with a derelict government and with a police force that sees extortion of the citizens as a way to make up economically and financially, SARS and its successor will remain a terror to Nigerians.

The issues and the resolution of the oppression against the people of Nigeria from unemployment, poverty, crimes and state agents extortion and exploitation are in the realms of economics and the dissolution of the unitary constitution foisted on Nigeria by the oligarchs. Nigeria is naturally a federal state by circumstances and history, that should allow the federating units to pursue their independent economic and security philosophies and arrangements. Inherent in their independence will be the economic and security architecture that suits them.

Economic well-being of citizen is number one security enhancer. A situation where the federating units are incapacitated from deciding the economic direction of their states because of the unitary constitution and the falsehood that the oil resources are sufficient to take care of everybody undermines the ability of the states to ensure economic prosperity as insurance against poverty and crimes.

For obvious selfish reasons, while majority of Nigerians are daily stridently calling for true federalism and restructuring (TFR) the ruling oligarchs continue to turn deaf ears to it and use the state machinery to vilify whoever advocates for it. The government is definitely not correctly reading the hands of history and reality. Because it’s not heeding the call for true federalism and restructuring, secessionist agitations are metamorphosing in IPOB’s Biafra and Oduduwa republics agitations. The protagonists of Biafra and Oduduwa republics aren’t necessarily calling for the dissolution of Nigeria. They are only giving a counsel that’s akin to the elders’ counsel to king Rehoboam of old Judah kingdom as against the counsel of his benefiting friends. If the oligarchs stick to their gun, then we shall definitely experience a ‘to your tent O Nigerians’.

#EndSARS is good, but it’s not an end. It’s one of the means to the end. It is obvious that the current ruling oligarchs are deaf and obstinate to the cry of Nigerians for independence from poverty, crimes and injustices. It is important for #EndSARS to continue and align with the real movement for true federalism and restructuring; a movement that will bring about structures that will address the recurring problems of SARS and its successor.

As the inspector general of police promised, a successor of SARS will soon be named with some cosmetic and window dressing. But the motives and operations will remain the same. It does seem imperative that while we are at it now, #EndSARS’ should dovetail into the real agenda for the freedom of Nigeria from poverty, unemployment, crimes and police brutality and exploitation occasioned by the unitary constitution. The unitary constitution is the culprit and the people who are refusing to yield to the demand that it must be dismantled are culpable of heinous crimes against Nigerians.

#EndSARS mustn’t be deceived into the euphoria that it has won anything, not even the battle by the promised dissolution of SARS in all states and Abuja. The IGP is very clear that a successor is coming. Nothing is going to change for good. Only a restructuring of Nigeria that gives independence to the federating units will bring about positive development to Nigeria in terms of economic growth and security of life and properties. The IGP doesn’t have authority to initiate that. Only president Buhari can set the ball rolling in the direction of TFR, as he has been inundated with calls from nationalities, groups and eminent Nigerians.