According to the Deputy Director, Army Public Relations, 7 Division, Ado Isa, the murdered officer of the Nigerian Army, Colonel D.C. Bako, was killed on Sunday 20 September at about 10 a.m. 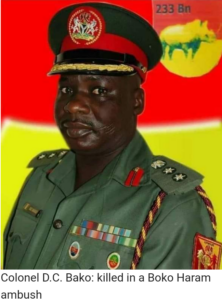 Bako was killed as he led a patrol to clear Boko Haram terrorists from Sabon Gari-Wajiroko axis near Damboa.

His patrol team was trapped in an ambush set by the terrorists.

A security consultant and ex-armoured crewman of the Nigerian army, by the Twitter name of Mazi Okay, described Bako as an Iroko.

“Col Bako until his death this morning was the greatest of all time since the beginning of the war against boko haram.

“A man who crushed and destroyed all Boko Haram cells and networks around Yobe”.

His death re-ignited social media calls for the removal of service chiefs, who have overstayed in office.