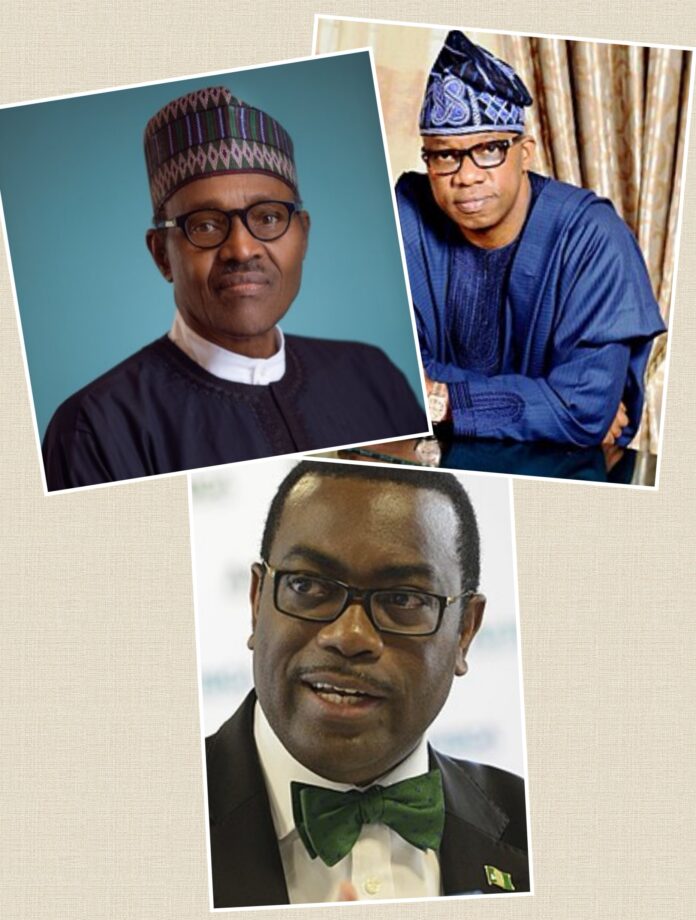 Buhari, who felicitated with Adesina on behalf of the Federal Executive Council and Nigerians in general, explained that the news of the victory came during the Council of State meeting, which was attended by former heads of state, Senate President, governors, some ministers, and senior government officials.

Buhari, in a statement by his Special Adviser on Media and Publicity, Femi Adesina, applauded reelected president’s versatility, experience at both national and international engagements, saying he believed that Adesina would “further deploy these qualities to energise the pan-African financial institution.”

He urged him to remain “focused and steadfast in pursuing the noble goals of making life better for Africans through various development plans, already captured as High 5s.”

The statement explained that the Secretary to Government of the Federation, Boss Mustapha, announced the good news of Adesina’s reelection to which Buhari led a round of applause immediately, saying: “He (Akinwumi Adesina) deserves it.”

The Nigerian President extended appreciation to the African Union for its endorsement of Adesina much earlier, and to shareholders of the bank who worked tirelessly to ensure the return of the visionary leader.

Buhari rejoiced with family, friends and professional colleagues of Adesina over the re-election, while commending members of staff and Board of Governors of the bank for their consistent support for the former Nigerian Minister of Agriculture and Rural Development, and his management team.

While pledging full support of his government to ensure a successful tenure for the bank’s leadership, the Nigerian President prayed God to continue to strengthen Adesina and his team for greater good to the continent.

In his congratulatory message to Adesina, who hails from Ogun State, Abiodun described his reelection as a blessing to Nigeria.

“On behalf of the good people of Ogun State, I congratulate Dr. Akinwumi Adesina on his re-election as President of the African Development Bank.

“It is not surprising, and it is indeed a blessing to our great nation, Nigeria to have retained leadership of the regional institution, when one considers the many developmental contributions by the bank to member countries.

“I wish him a successful new term that will steadily continue to take the African region to greater heights,” the governor said.