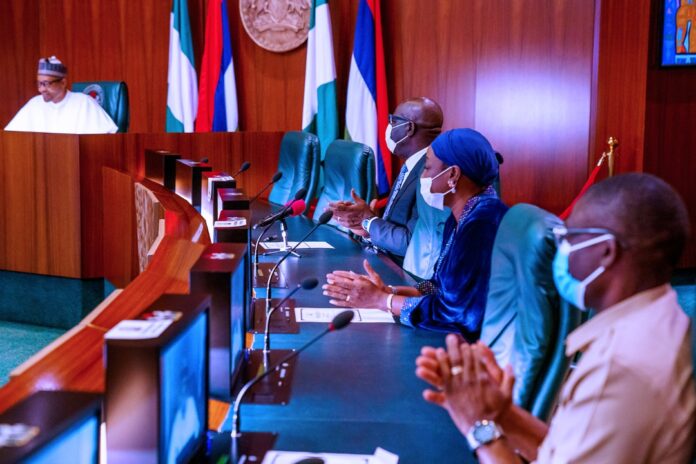 In what appeared to be a self-appraisal and telling hard truth to whoever cares to listen, President Muhammadu Buhari Friday revealed how he simplified the process that led to the victory of the Peoples Democratic Party (PDP) over his own party, All Progressives Congress (APC), at the just concluded Edo State governorship election.

While noting that his single desire is to make sure that innocent Nigerians don’t suffer regardless of party affiliation, the President disclosed his personal position ahead of Edo poll, saying: “If contestants have too much money and they decide to spray, so be it. But what I insist is, nobody should go and raise a counter force to the government, arm heavily-drugged thugs to go and humiliate people.”

These revelations were disclosed in a statement by Buhari’s Special Adviser on Media and Publicity, Femi Adesina. 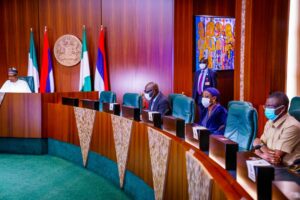 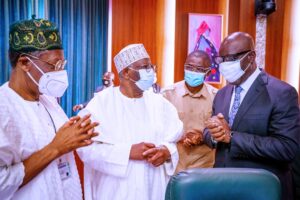 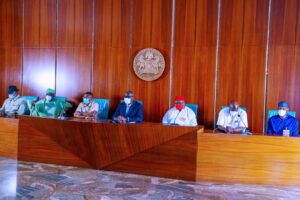 The statement said the President specifically ordered the security agencies to protect Nigerians, explaining that the Nigerian leader wanted Nigerians to appreciate that he respected them as Nigerians and that he’s bound by the oath he has taken.

Speaking, while receiving in audience Edo State Governor, Godwin Obaseki, his Deputy, Philip Shuaibu, and other party supporters on a thank-you-visit to State House in Abuja, Buhari declared that he’s doing his best to build a new APC based on a rule of law and respect for human rights and human beings, from polling units to local governments, to states and to the federal level.

He said despite the fact that his party has lost some states in elections, he wished to leave behind a political culture based on integrity.

According to him, “I thank you for bringing your deputy and supporters to come and see me after beating my party. I am supposed to preside over all Nigerian interests whether I like it or not, but my single desire is to make sure that innocent people don’t suffer. That message I got across to the Inspector General of Police, that elections must be free and fair.

“If contestants have too much money and they decide to spray, so be it. But what I insist is, nobody should go and raise a counter force to the government, arm heavily-drugged thugs to go and humiliate people.

“I want Nigerians to appreciate that I respect them as Nigerians and that I am bound by the oath I have taken, that their security is in the hands of God and in the hands of the government, which I am leading.

“We have lost states across the country. Now I do not like to escape the responsibility, seeing as the leader of the country, I am also the leader of my party, that I am not leading the party very well.

“I am trying to make sure that the party is built on a civilised basis, rule of law and respect for human rights and human beings, right from polling units to local governments, to states up to Abuja and that’s what I have been insisting as my contribution to the National Working Committee and executive of the party. I know we are a developing country, a developing economy and trying to develop our political culture.

“I want the development of political culture to be based on integrity and accountability. Let people work very hard and earn what they are looking for through their hard work and through fair competition.”

He added jocularly that he was congratulating Edo State governor “reluctantly” because he defeated the candidate of his party.

In his remarks, Obaseki thanked the President for ensuring that fair play reigned during the election which saw him victorious.

He said: “You would recall a couple of weeks before the election, I came to see you and you assured me that we were going to have a free, peaceful and credible election. That is what we had during the election of 19th September and the whole world has acclaimed that Edo election was perhaps one of the best conducted in recent times in Nigeria.

“This could not have been possible without your insistence that the right things be done, and for that, we want to say thank you very much.”

He also thanked the President for his congratulatory message, assuring him that the message “has been internalised, that it is God that made this election possible, therefore I should be humble about the election and also magnanimous in victory.”

He pledged his unalloyed loyalty and support and that of the people of Edo State to the President and the Federal Government.

In the same.vein, Governor Obaseki met Vice President, Yemi Osinbajo in his office.

Obaseki said he visited the VP “In continuation of our ‘Thank You’ tour, as we continue to show appreciation to various stakeholders that contributed to the success of the Edo Governorship election on Saturday. 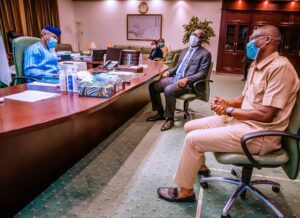 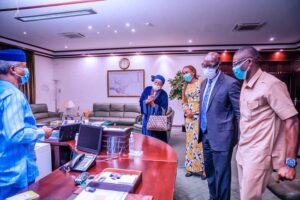 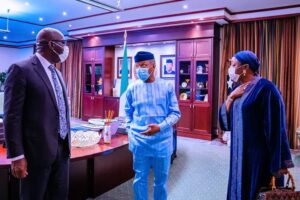 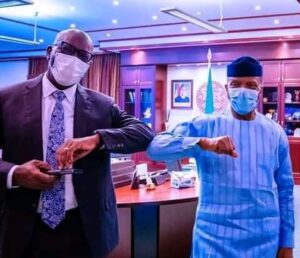