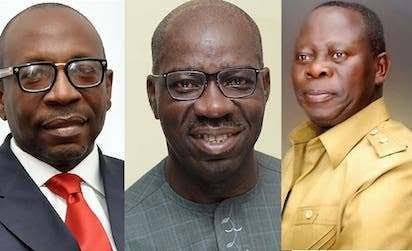 Winner of the just concluded Edo State Governorship election held on September 19, 2020, Godwin Obaseki, has extended a hand of friendship to a former National Chairman of the All Progressives Congress (APC), Adams Oshiomhole; and the APC candidate in the Saturday election, Osagie Ize-Iyamu.

Obaseki, currently wrapping up his first term as Edo State Governor, a position he attained under the APC, and contested again as a Peoples Democratic Party (PDP) candidate, after being frustrated out by his traducers within the broom party, on Tuesday called on the opposition to put their differences aside and work for the betterment of the state.

Obaseki made this call during his speech after the Independent National Electoral Commission issued certificates of return to him and his deputy, Philip Shaibu.

“To our friends and our brothers on the other side of the divide, we are one family in the pursuit to provide services and public good for our citizens.

“I’m using this opportunity to extend the hand of fellowship to my brother, Pastor Osagie Ize-Iyamu, and his other colleagues in the All Progressives Congress to join us and work with us so that we can move Edo forward.

“On a specific note, I want to use this occasion to call on the former chairman of the APC, Comrade Adams Oshiomhole, that the fight is over and he should come and join in building the house where he was part of laying the foundation.

“We have no malice, the only thing we disagreed on is in the approach in moving Edo forward.”

The presentation of certificates of return was presented by INEC’s National Commissioner in charge of Edo, Rivers, and Bayelsa States, Mrs May Agbmuche-Mbu, made the presentation at the INEC office in Aduwawa, Benin City, the Edo State capital. 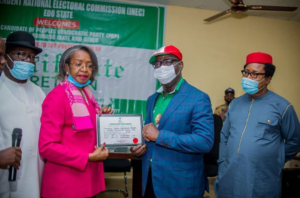 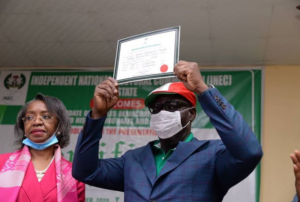 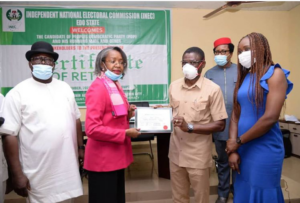 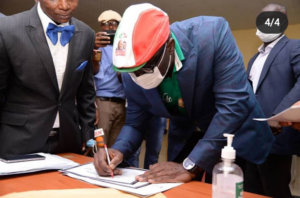 Edo Guber: Oshiomhole, Ize-Iyamu go down on their knees for support