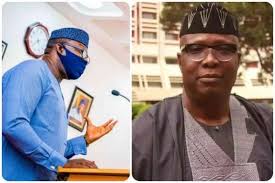 The crisis rocking the All Progressives Congress (APC) in Ekiti State Friday took another turn as the Tony Adeniyi-led faction suspended Governor Kayode Fayemi and the Paul Omotosho-led Executive Council over anti-party activities.

The latest suspension order came barely 24 hours after Omotosho’s faction loyal to the governor suspended the Special Adviser on Political Matters to the President, Ojudu Babafemi, and 10 others.

But respite seemed to have come the way of Fayemi, Babafemi and others as APC National Secretariat in a statement on Friday by the Deputy National Secretary, Yekini Nabena, described the suspensions as a “nullity.”

Nabena said the attention of APC National Secretariat has been drawn to a purported and widely-reported “suspension” of Fayemi as well as an earlier reported “indefinite suspension” of BBabafemi and other party members in the state.

Suspending Fayemi and Omotosho on Friday, the Adeniyi-led faction alleged that the governor’s camp has refused to hold Ward Congress in Ekiti State since inception of the party, describing the governor’s faction as illegal.

Adeniyi represented Ekiti South Senatorial district between 2011 and 2015. He explained that he was made Acting Chairman of Ekiti APC owing to the “absence of direction or directive from the National Body” and was adjudged as “the only one thus capable to call the SEC (State Executive Council) meeting as duly required by the constitution henceforth.”

The senator further described his factional supporters as “the authentic members” of the party in the state that were duly constituted as members of the National Convention of the party, based on Section 12.8 of APC Constitution.

The Adeniyi faction after its meeting on September 23 accused Fayemi of anti-party roles in the September 19 Edo State governorship election, which saw the party losing to the Peoples Democratic Party (PDP).

However, APC National Secretariat has called on the warring factions to sheathe their swords to allow for genuine reconciliation.

“The actions are a nullity as the party’s National Secretariat is yet to receive communication from the state chapter on the purported ‘suspensions.’ We strongly advise all members to adhere to our party constitution.

“Governor Kayode Fayemi remains the leader of the party in Ekiti State.

“In line with the mandate of the Governor Mai Mala Buni-led APC Caretaker/Extra-Ordinary National Convention Planning Committee and the President’s admonition to party members to ensure and support ongoing amicable and rancour-free settlement of internal party disputes, we call on our esteemed party members and leaders in Ekiti State to be duly guided.

“For the avoidance of doubt, the Architect Paul Omotosho-chaired APC Ekiti State Working Committee is the authentic, valid and duly recognised Executive as no factions or divisions exist in the State Chapter,” Nabena said.

After painstakingly reviewing the activities of some members of the All Progressives Congress (APC) in Ekiti State, we the authentic members of the Party in the State and Members of State Executive Committee per Section 12.8 of APC Constitution being duly constituted members of the National Convention of the Party, rose from its meeting of the 23rd September, 2020 and resolved as follows:

1. We note the continued illegalities in the name of the party, being conducted by Dr. Kayode Fayemi, who as Governor is an ordinary member of the SEC and ought to have called meetings of this duly constituted body as a critical party organ, has failed to do so since his assumption of office in 2018.

2.That the body currently masquerading as the elected members of the SEC or as the State Working Committee or appendages is unknown to us (as due statutory members of SEC) since no Ward Congress has taken place in Ekiti State APC since inception. All SEC members listed in Section 12.8 of our constitution, (i) to (xxvii) as such are open positions since only duly officiated Ward congresses with INEC observation can fill these positions.

3.As such, only the duly elected members of the APC in the state serving as Governor, Deputy Governor, Speaker & Deputy Speaker as well as Principal Officers of the House and Members of the National Convention which includes all present and past National Assembly members today constitute the State SEC of our great party.

4.To this end, in the absence of a properly organized body and meeting, and the continued insistence of the Governor to neglect his duty to initiate Ward Congresses or call a meeting of the SEC to deliberate upon pertinent issues, we as loyal members of our party and members of the State Executive Committee met to rescue our party from continued denigration and abuse, and resolved thus:

1.That Dr. Kayode Fayemi, the Executive Governor of Ekiti State is hereby suspended from the Party in view of his numerous anti-Party activities especially his role in the recent concluded governorship election in Edo State which is contrary to the provisions of Article 21 (A) (ii) of the APC Constitution.
For five days prior to the Edo elections Gov Fayemi hosted PDP big wig Mr Femi Fani- Kayode in the government house in Ado Ekiti in the run up to the Edo elections . It was here they perfected the coup against our party in Edo State. This is same Fani-Kayode who daily abuses President Muhammadu Buhari, Vice President Yemi Osinbajo, the APC as a party as well a vital section of our country. We have evidence of that meeting.

Fani-Kayode specifically said he has gone on his tour as part of an effort between him and Fayemi to build a cross-party alliance and few hours after leaving Ekiti he fired a shot at Asiwaju Tinubu.

1 (a) We also have evidence of celebration by his aides in Ekiti government house and on social media.

1(b) We also recall his role in the gubernatorial election in Oyo State where he supported the PDP candidate to defeat the APC candidate. A second tranche of money he sent to Gov Makinde in the election was intercepted by soldiers. The courier Mr Ayo Adegbite, his Chief Protocol Officer was arrested and he immediately disowned and announced his sack . Mr Adegbite remains his aide till date.

1(c) We also recall the support he provided a PDP candidate who challenged an APC Senator Prince Dayo Adeyeye in the Tribunal. He moved the judges to Kaduna to deliver judgement when he knew what he planned against his party was unpopular in Ekiti. We have more to tell on this betrayal and traitorous act of his. APC Senator is out of the Senate today and PDP is in. The relationship between Fayemi and Senator Olujimi of PDP , the beneficiary of his treachery is known to all in Ekiti State.

We also recall his resort to court when majority of party members nominated late Senator Abiola Ajimobi for Deputy National Chairman of the party. He fought Ajimobi till death.

2. That the Paul Omotosho led faction of APC Executive in the State is hereby declared illegal and suspended from the Party for failure to emerge in accordance to the Constitution of the Party.

3.That Paul Omotoso and his co travellers’s refusal to respect court proceedings in which they are not only joined but appeared in court through the proceedings but defiantly disrespected the court contrary to the hallowed decision of the Supreme Court in OJUKWU vs GOVERNOR OF LAGOS STATE

4.That Paul Omotosho faction of the executive should desist from parading themselves as the Executive Members of the Party in the State and that the Nigerian Police and Independent National Electoral Commission (INEC) and the general public should take note.

5.That Senator Tony Adeniyi, as a statutory member of the SEC going by our party’s constitution, was elected by all members attending as the Acting Chairman of the State Executive Committee in the absence of direction or directive from the National Body. He is as such the only one thus capable to call the SEC meeting as duly required by the constitution from henceforth.

6.The committee seating also agreed to begin bridge building across our members, statewide and nationally, and set up a special intervention committee, APC Majeobaje Working Group, to be led by Prince Bamgboye Adegoroye, and six other individuals from across our great state. That working group will henceforth do the hard work of rebuilding APC in Ekiti state and prevent the oncoming annihilation of our party if we take no action at the upcoming polls.

We note that the All Progressives Congress is a party of progressives, and must do things only in line with the law. The APC cannot act against its constitution or the law of the land, hence this intervention became urgently necessary and pertinent before marauders destroy the party permanently.

It must be emphasized that with the increasingly discerning capacity and sophistication of our people we cannot afford to take them for granted. We must be able to sustain the relevance of our party in Ekiti State, hold our members and win new members. We are obligated to ensure that the light of our electoral prospect and fortune is not dimmed or extinguished.