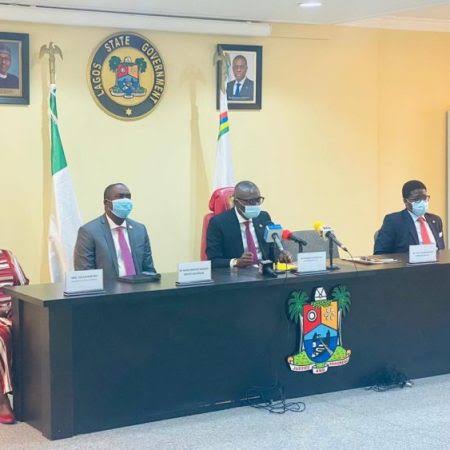 The 7-member Judicial Panel of Inquiry and Restitution to probe accusations of brutality and human rights violations leveled against the now disbanded police tactical unit, Special Anti Robbery Squad (SARS) has been sworn-in on Monday at the State House, Marina, Lagos

Lagos State Governor, Babajide Sanwo-Olu, at the swearing in of members of the panel said in the last two weeks, the state had witnessed the justified protests of youths against police brutality, saying that the pain of the young ones had been felt in various parts of the State and country as well as in the diaspora.

“They have spoken in one voice against the unbridled violation of their rights and lives by the disbanded Special Anti-Robbery Squad. Through the #EndSARS protests, Nigerians from all walks of life have spoken loud and clear on the need for government at all levels to take immediate and concrete actions to secure the lives of innocent Nigerians, especially the youth – many of whom have suffered gross violation of their fundamental human rights.

“Some have even lost their lives under questionable circumstances. In one of my engagements with the protesters, they gave me a list of five immediate demands, which I personally presented to President Muhammadu Buhari in Abuja last Tuesday.

“I must, however, state that even before my visit to Mr. President, I had taken action on some of their demands, which included the immediate release of all those detained on account of their participation in the #ENDSARS protests and the establishment of a N200 million fund for compensation to families and individuals who were victimized by officers of the disbanded SARS,” he said.

According to Sanwo-Olu, in response to one of the demands of the youths and in line with the resolution of the National Economic Council on October 15, 2020, under the Chairmanship of Vice President Yemi Osinbajo, the Lagos State Government had constituted a Judicial Panel of  Inquiry and Restitution under the Chairmanship of a Retired Judge of the Lagos High Court, Justice Doris Okuwobi.

He said in Lagos State, the government fully understood the enormity of the task at hand and the need to ensure that it uphold the tenets of due process and fair hearing, which was why government had selected a seasoned and
unblemished Judge to head this Judicial Panel of Inquiry.

“The Panel will sit for six months with the following terms of reference: Receive and investigate complaints of police brutality or related extra judicial killings in Lagos State and ensure that victims and their families are able to publicly air their grievances; evaluate evidence and draw conclusions on the validity of the complaints; determine and recommend compensation and other remedial measures where appropriate, and issue cheques in favour of victims
or their dependents; determine the officers responsible for the abuse of victims and recommend their prosecution.

“The panel is to make recommendations to the Lagos State Government on what must be done to ensure that the Police and all security agencies no longer abuse the rights of citizens. Recommend Standard Operating Procedures for the Police on relating with citizens while discharging its duties.

“By virtue of Section 5 of Tribunals of Inquiry Law, Laws of Lagos State, 2015, this Tribunal being set up today has powers to procure all such evidence, written or oral, and to examine all such persons as witnesses as the Tribunal may think necessary or desirable to procure or examine and summon any person in Nigeria to attend any meeting
of the Tribunal to give evidence or produce any document or other thing in the person’s possession,” he added.

The governor explained that the Tribunal had a mandate to carry out the directives of the Federal Government to enable it discharge its duties without fear or favour, advising members to be mindful that these complaints might be against Police Officers that are still in active service or already dismissed.

The governor reiterated the commitment of his government to implement the recommendations of the panel, expressing determination to ensure that the Police and other security agencies no longer brutalise or kill people.

“We will continue to play our part in the entrenchment of a just and secure society. I am on the side of the young people out there: I understand your pain and I know your concerns are genuine and legitimate. I must reiterate
that while we were able to immediately acquiesce to some of your demands, some others will require time: we ask you to bear with us as we dutifully work on your demands. I assure you that Lagos State will neither tolerate the violation of your fundamental human rights nor the victimization of its residents.

“I believe that some of the actions we have taken including the constitution of this Judicial Panel of Inquiry, should to a large extent, show our sincerity and willingness to address all your concerns. We are committed to the complete overhaul of the Nigerian Police; the inauguration of this judicial panel is only the first step in a long line of reformative actions that will lead to a thorough revamp and reorientation of the Nigerian Police.

“I will, therefore, like to renew my appeal to you to suspend the protests and create an atmosphere for the resolution of all pending demands. I encourage everyone brutalized by the disbanded SARS (including the families of those who died) to present their case before this Panel,” he said.

Sanwo-Olu said the task of reforming the Nigerian Police was achievable, but noted that it required the cooperation of all Lagosians, including the youth to accomplish this, saying that “Through our collective actions, we will ensure that all wounds are healed, justice is served, and every guilty police officer is prosecuted.”

The panel, which is headed by retired Justice Doris Okuwobi, will sit for six months and is mandated to thoroughly investigate all verifiable claims of abuses and fatalities arising from SARS engagement in the State, with the objective to bring erring officers to justice and get compensation for the victims.

Fire burns one beyond recognition, others injured in road accident