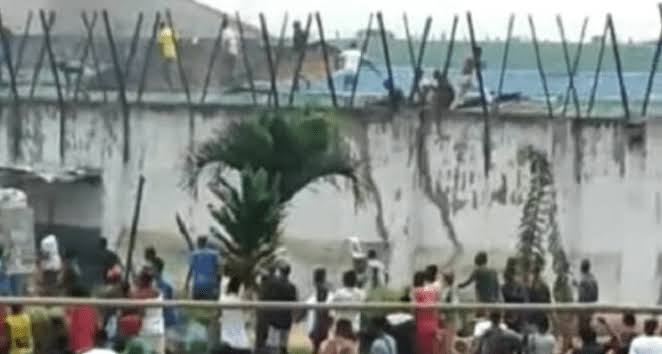 The ongoing #EndSARS movement has assumed a violent dimension in Edo State as people posing as protesters attacked facilities of Nigeria Police Force.

Describing the incident as unfortunate, Nigeria Police Force explained that the extent of damage could not be ascertained at the moment.

It, however, said report indicated that “the protesters carted away arms and ammunition from the armoury and freed the suspects in custody before setting some of the facilities ablaze.”

The bloody situation has led to an imposition of a 24-hour in the state by the Governor Godwin Obaseki-led administration.

By this government’s directive, schools and businesses are to shut down activities accordingly. Those who couldn’t move safely were asked to stay put till 4pm when calmness was eventually restored.

“This decision has become necessary because of the very disturbing incidents of vandalism and attacks on private individuals and institutions by hoodlums in the guise of #EndSARS protesters.

“While the government of Edo State respects the rights of its citizens to undertake legitimate protests, it cannot sit idly when hoodlums have taken laws into their hands to cause mayhem on innocent citizens and the state.

“By the directive, schools and businesses are to shut down activities accordingly. Those who cannot move safely are to stay put between now and 4pm till calmness is restored.

“Parents are advised to rein in their children, youths and wards, to forestall further breakdown of law and order.

“The responsibility of government is to protect lives and property and maintain law and order, therefore, anyone found outside in violation of the curfew would be dealt with according to the law,” Obaseki said, in a statement by the Secretary to the State Government, Osarodion Ogie.

Also reacting to the ugly development in Edo State, Nigeria Police Force said it has swung into action, “doing everything possible at the moment to bring the situation under control, protect lives of innocent citizens and prevent further attacks on any other critical infrastructure in the state.”

The police called on parents/guardians to prevail on their children/wards to desist from acts of violence under any guise whatsoever.