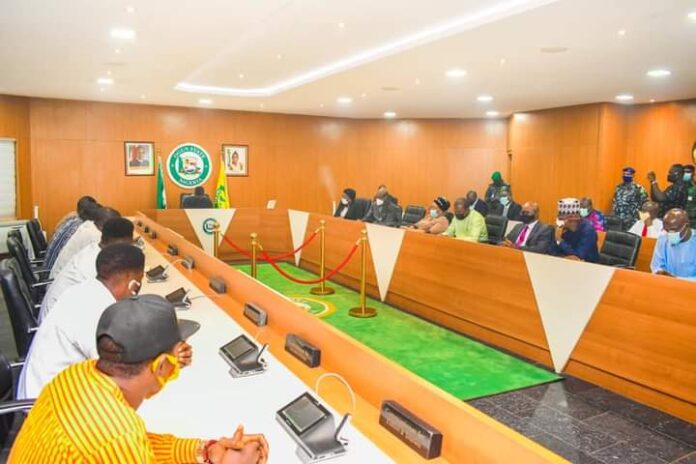 Ogun State Governor, Prince Dapo Abiodun, has again called on the Nigerian youth to call off their protest and engage government in a meaningful dialogue to find amicable solutions to their demands.

Governor Abiodun who made the call when he hosted representatives of students of higher institutions in the State in his office at Oke-Mosan, Abeokuta, said it was time to halt the protest before it degenerated into an wholesome situation that could cause choas in the country.

“Please wind down the protest; you have spoken and the whole world has heard you. Where your freedom stops, is where that of others starts. Don’t allow this protest to degenerate into a situation where people will begin to attack each other.

“It is time to dialogue so that we can find solutions to the problems you have highlighted. The National Economic Council has mandated us to handle the situation and here in Ogun State, we have inaugurated a panel to handle cases of brutality by security agencies with a view to ensure that appropriate punishment are meted out to those found wanting”, he explained.

Prince Abiodun who said he identified with the protest, noted that Nigerians, like citizens of other free countries of the world, have the right to protest. He, however, observed that the Nigerian youth have finally demonstrated that they are resilient and could rise up to be counted when the occasion arises.

He acknowledged the peaceful conduct of the students in the State since he assumed office, saying it was a demonstration of the qualities associated with people of the State and what they stand for.

“I want to appreciate you for being disciplined. You have behaved well since I assumed office. Ogun State students have not been reported to have behaved irresponsibly. Keep it up. It is the way you conduct yourselves today that determine how far you go tomorrow”, the Governor said.

The Governor said his administration has fashioned out ways of addressing the numerous challenges facing higher Institutions particularly in the area of electricity, transportation, provision of laboratories and workshops.

He informed the students leaders that access roads on their campuses are currently under rehabilitation, while government was working out a Public Private Partnership arrangements to build hostels and address transportation issues.

He said Goverrnment would reactivate their faulty transformers to improve power supply in their institutions.

Government, he maintained, would look into bursary and scholarship, assuring the students that those who excel would be rewarded to serve as inspiration to others.

Speaking earlier, the President, National Association of Nigerian Students (NANS), Ogun State, Comrade Tomiwa Bamgbose, while reeling out the challenges confronting the students, lauded the Governor for intervening in the Tai Solarin College of Education crisis and giving automatic employment to best graduating students in many polytechnics and universities in the State.

The President, National Association of Ogun State Students (NAOS), Comrade Gbemileke Okuronbi, appreciated the Governor for his strides in the education sector, pleading for the payment of bursary to ameliorate the suffering of the students.