A direct flight, which departed Lagos, Nigeria has arrived Montego Bay, Jamaica for the first time on Monday.

The inaugural direct-flight operated by Air Peace was on Tuesday confirmed by the Nigerian Ministry of Foreign Affairs in a statement signed by the Spokesperson, Ferdinand Nwoye. 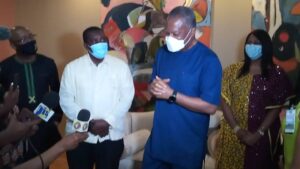 According to the Ministry, the inaugural direct-flight from Lagos to Montego Bay was part of activities to commemorate 50 years of good bilateral relations between the Federal Republic of Nigeria and Republic of Jamaica.

“It is expected that the welcome development will deepen relations between the two countries in areas of tourism, education and economic activities”, Nigerian Ministry of Foreign Affairs stated.

In a statement posted on his verified twitter page, Nigeria’s Minister of Foreign Affairs, Geoffrey Onyeama announced the arrival of the inaugural direct flight to Montego Bay.

“We were received at the Sangster International Airport, Montego Bay by the Minister of Transportation of Jamaica and other top Jamaican government officials”, Onyeama stated.

Aboard the flight were some senior Nigerian Government officials and members of the organised private sector.

Fashola Reopens Eko & Marine Bridges, Thanks Lagosians for Their Cooperation