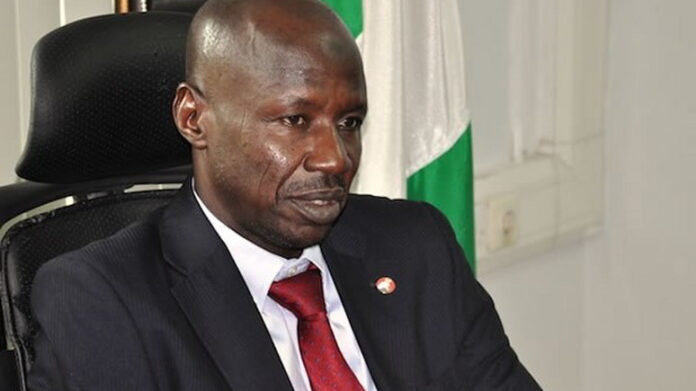 Suspended Acting Chairman of the Economic and Financial Crimes Commission (EFCC), Ibrahim Magu, has been accused of re-looting funds recovered by the commission as well as bribery.

Magu, who is currently being interrogated by a Presidential Investigation Committee on the EFCC-Federal Government Recovered Assets and Finances from May 2015 to May 2020, headed by retired Justice Ayo Salami, has been accused of mismanagement and lack of transparency in managing recovered assets by EFCC.

A final report of the presidential probe panel obtained by the News Agency of Nigeria (NAN) had seriously indicted and implicated Magu on various allegations levelled against him.

The new facts have emerged on how interest rates accruing from N550 billion recovered by EFCC in the period under review were allegedly re-looted.

Magu is now expected to disclose the whereabouts of the missing interest funds running into millions of naira.

NAN also observed that the Final Report of Presidential Committee on Audit of Recovered Assets (PCARA) that covered the period of May 29, 2015, to November 22, 2018, had also confirmed the concerns of the public about contradictory recovery figures emanating from Magu.

“It is quite disturbing that conflicting figures are being circulated in the public space by EFCC as the amount of recovered funds.

“These inconsistencies cast serious doubt on the accuracy of figures submitted by EFCC. It is the committee’s view that EFCC cannot be said to have fully accounted for cash recoveries made by it.

“It must be pointed out that the discrepancy of more than thirty-nine billion naira does not include interest accrued in this account since it was opened.

“It, therefore, casts serious doubt on the credibility of the figures and means that a substantial amount of money has not been accurately accounted for.

“Failure to report on the interest on actual lodgements clearly establishes that the interest element of over N550 billion has been re-looted relating to the period under review.

“This is an apparent case of manipulation of data in a very brazen and unprofessional manner and this has greatly eroded the public confidence in the anti-corruption efforts,’’ the report stated in part.

NAN also reports that PCARA revealed how the investigative reports on EFCC’s activities by the Nigeria Financial Intelligence Unit (NFIU) exposed acts of corruption and money laundering against some EFCC officials, including Magu.

“The NFIU reports established that the Acting Chairman has been using different sources to siphon money from EFCC, and in some cases collecting bribes from suspects.

“The report has shown that a particular Bureau de Change, owned by Ahmed Ibrahim Shanono linked to the Acting Chairman based in Kaduna has more than 158 accounts and has been receiving huge sums of funds.

“The link to Magu was also established by the payment of N28 million to Falana who is a close associate and ally of the Acting Chairman,’’ PCARA report further revealed.

NAN reports that the Salami probe panel is expected to continue sitting on Monday, while Magu’s lawyer, Oluwatosin Ojaomo, had on Friday applied for an administrative bail for his client, who is facing corruption and other charges before the panel.