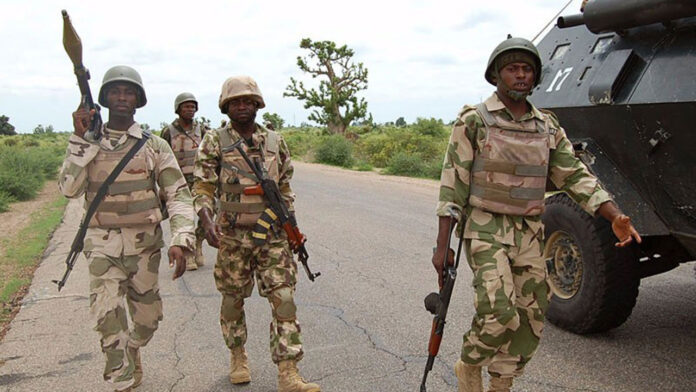 Six Nigerian soldiers have died during an attack by jihadists who rammed an explosives-laden vehicle into them during a clash in Borno state, Nigeria’s North East.

Two military sources on Tuesday disclosed to AFP that the suicide bombing by a member of the Islamic State West Africa Province (ISWAP) group occurred Monday as the soldiers were conducting a raid of the group’s stronghold in the village of Talala.

They said scores of jihadists have been killed in the operation launched last week on ISWAP’s second largest camp.

“Our men dominated the terrorists, killing dozens, and out of frustration they sent a suicide bomber who killed six soldiers,” one of the officers said.

They said the troops overran the Talala camp despite the bombing.

On Saturday 13 soldiers were killed in an ISWAP ambush near the town of Gujba in the neighbouring state of Yobe, according to military sources.

ISWAP, which split from the mainstream Boko Haram in 2016, has become a dominant group, focusing on military targets and high-profile attacks, including against aid workers.

The jihadist group has in recent times stepped up attacks on troops and frequently abduct travellers at bogus checkpoints along the highway linking the Borno capital Maiduguri and Damaturu, the capital of Yobe.

No fewer than 36,000 people have been killed in the conflict since 2009 with around two million displaced in the northeast, according to the UN.

Ravaging neighbouring countries – Chad, Niger and Cameroon, the endless violence prompted a regional military coalition that would bring the deadly activities of the jihadist groups to an end.