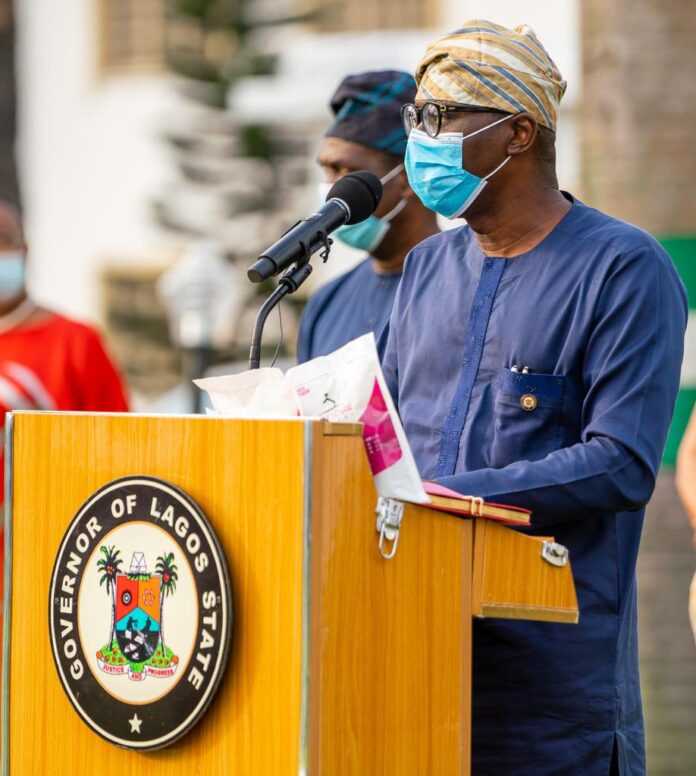 Lagos State Governor, Babajide Sanwo-Olu, has directed all tertiary institutions in Lagos State to re-open for academic activities from September 14.

He added that his administration was working towards re-opening of primary and secondary schools anytime from September 21.

However, the governor, said the decision to re-open the basic and secondary schools is not cast in stone, noting that this is subject to a review of our ongoing modelling of the state’s response to the pandemic.

This was disclosed directive by Sanwo-Olu at the 18th state-wide briefing held at the State House in Marina on Saturday.

The re-opening order was coming six months after all tertiary institutions and basic schools were shut on the order of the government, following the outbreak of the novel Coronavirus (COVID-19) pandemic.

Sanwo-Olu said the decision to re-open the schools was carefully thought through, given the decline in the number of positive cases and the progress recorded in the state’s response. He asked the management of the schools to ensure adherence to the safety guidelines as they re-open their campuses for activities.

The governor, in addition, also permitted the re-opening of recreational centres and social clubs that have registered trustees, but on the condition that they obtain a provisional Safety Compliance Certificate through the registration portal of Lagos State Safety Commission (LSSC).

“I am pleased to announce that tertiary institutions in Lagos State will re-open from September 14, 2020. We are also working towards the reopening of Primary and Secondary Schools anytime from September 21, 2020.

“However, the decision to re-open the basic and secondary schools is not cast in stone and is subject to a review of our ongoing modelling of the state’s response to the pandemic.

“Also, social clubs and recreational centers that have registered trustees have also been permitted to open, on the condition that they have applied for and obtained a Provisional Safety Compliance Certificate through the registration portal of Lagos State Safety Commission.

“Restaurants are now permitted to open for in-dining services, but they must ensure the maintenance of a 50 per cent maximum occupancy at any point in time. They must also have obtained a provisional Safety Compliance Certificate,” he said.

Sanwo-Olu said his administration remained sympathetic to the plight of business owners, especially those operating in hospitality and tourism sectors.

He added that the state government was still reviewing the permissible opening dates for businesses tourism and hospitality industry, pointing out that there would be concrete decisions on easing the lockdown on tourism businesses before the end of September.

As Federal Government prepares to re-open international airspace for traffic on September 5, Sanwo-Olu said his administration had started to work with the Federal Ministry of Aviation and Nigeria Centre for Disease Control (NCDC) to put adequate measures in place in order to guarantee the safety and well-being of Lagos residents in the light of resumption of international air-travel.

The governor also ordered civil servants in the state’s unified public service to comply with existing guidelines and roster schedules issued by the Head of Service and the heads of MDAs.

According to him, “As a government, we will continue to keep our citizens informed and updated on the decisions that we are taking in response to the pandemic.

“We will also continue to ask for your understanding and cooperation. These are challenging times for all of us, and it requires extra levels of patience, sacrifice and3 understanding.”

Sanwo-Olu said the observed decline in the number of positive cases did not mean the pandemic was over. He urged residents to continue to adhere to the safety guidelines outlined by the health authorities.

“The fact that we have been seeing a gradual easing of the lockdown does not mean that we are now returning to our old way of doing things.

“The easing you are seeing is the outcome of a careful and deliberate attempt to ensure that livelihoods are not crippled by the overwhelmingly disruptive impact of the virus. It is certainly not an invitation to carelessness or nonchalance,” the governor said.

The governor disclosed that the atate’s Deputy Incident Commander and Commissioner for Health, Akin Abayomi, has been discharging his duty and responding to treatment, adding that Commissioner remained asymptomatic.

Sanwo-Olu, at the briefing, launched a COVID-19 Care Pack, which contains medications, hand sanitiser, face masks and handy medical equipment that could be used to check temperature.

The Care Pack is to be given to those who have been confirmed positive of the COVID-19 free of charge and who prefer home-based care.