Former President of Nigeria, Olusegun Obasanjo has appealed to the President Muhammadu Buhari-led government and citizens alike to eschew violence and embrace peace and dialogue to resolve issues surrounding the #EndSARS agitation.

The appeal was given on Wednesday in video recording and a letter that is now widely circulated on the internet.

Obasanjo, who was once a military Head of State condemned the shooting and murder of unarmed peaceful protesters and said the use of brute force has never been effective in suppressing public anger and frustration.

In his appeal to President Buhari, Obasanjo Calls for the withdrawal of men of the Nigerian army from the streets.

“It is clear that Mr. President and his lieutenants did not exhaust the opportunities for dialogue with the protesters before resorting to the use of force.

“It is worse that there is denial of wrongdoing in spite of overwhelming visual evidence. Great harm has been done buy it can be stopped before it completely spirals out of control”.

He asked Buhari to act now before it is too late. 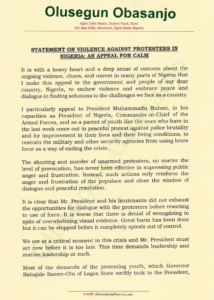 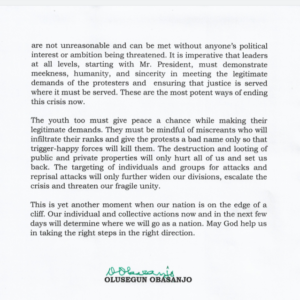