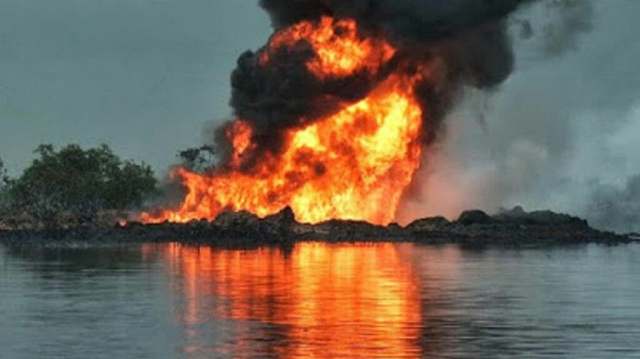 The attack on the Nigerian Agip Oil Company (NAOC) crude oil pipeline at the weekend might not be unconnected with the battle to control and influence surveillance contracts being handled by Dalong Security Company.

Sources in the Igbomotoru Community, in the Southern Ijaw Council of Bayelsa State, where there has been tension since the attack by suspected militant told The Guardian.

According to report, a former militant leader, ‘General’ Endurance, allegedly involved in illegal bunkering, was suspected to be behind the attack, which has now forced other crude oil platforms on the Ogboinbiri axis and adjourning communities to shut down to prevent fire outbreak and damage to the crude oil supply route in the area.

‘General’ Endurance is said to be engaged in a battle of supremacy with another former militant leader from neigbouring Peremabiri Community in an attempt to dominate and take over oil pipeline security surveillance job in the area.

It was also learnt that residents of the community contacted the Joint Military Task Force (JTF) code named Operation Delta Safe and reported the activities of the militants, but they were still awaiting the deployment of security operatives.

“The boys engaged in sporadic shooting and they vandalised two Agip pipelines and set them ablaze close to the Beninkurukuru bush. The fire has led to the shutting down of some other facilities in the area.”

Another community source said the Igbomotoru people have dissociated themselves from the activities of Endurance and his boys, while a JTF source, who confirmed the development, said the Sector 2 Command of the JTF in the state, was investigating the incident.

When contacted, spokesman for the Joint Military Task Force, Major Victor Odukoya, said he would get back with details, but he could not do so as at the time of filling this report.

Similarly, no fewer than 100 youths yesterday demanded for the reinstatement of two of their Chiefs, who were disengaged from surveillance contracts by the company without cogent reasons.

The youths from Ayamakede and Ugamakede communities in Andoni Council of Rivers State, aided by juju priests, blocked the premises of Green Energy International Limited and Lekoil in the GRA area of Port Harcourt

They are accusing the firms of negligence and insensitivity to their plight.

Speaking to newsmen during the protest, their spokesman, Awaji Etemila, said the firms had not employed indigenes of the communities for over five years, adding that the companies promised to provide electricity for them but had failed to fulfill their pledge.

Responding, Assistant Community Relations Manager of Green Energy, Enya Goodluck, appealed to the protesting youths to nominate three persons to negotiate with its management on the issues bothering them.