Most contracts from the Niger Delta Development Commission (NDDC) are awarded to members of the National Assembly, says the Minister of Niger Delta Affairs, Sen. Godswill Akpabio.

The Minister made the revelation on Monday when he appeared before the House of Representatives committee on NDDC, who are probing trillions of Naira allocated to the commission for the development of the oil rich region over the years.

Akpabio’s comment, which apparently opened another cankerworm in the ongoing probe, erupted as he was being grilled about NDDC expenditure amid a forensic audit during the public hearing by members of the House of Representatives committee on NDDC. 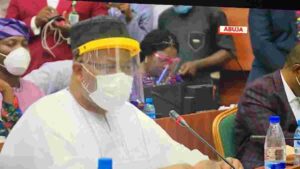 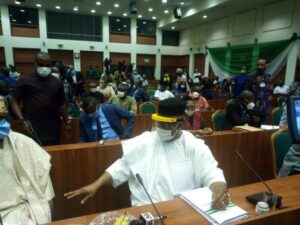 The Minister had been invited by the lawmakers on Friday to defend his actions as Minister of Niger Delta Affairs and shed more light on financial misappropriation within the NDDC.

“We cannot close down the Niger Delta Development Commission because of the fact that we are doing (a) forensic audit,” he said.

“The NDDC plays a vital role in ensuring the peace and security of the region and 90 percent or more of the resources of the country come from there.

“So it is important that people who have gone to court, people who genuinely did jobs should be paid for their jobs. For me, I am not against it because, of course, who are even the greatest beneficiaries? It is you people.”

A member of the committee took him up on his “you people” allegation and asked him to clarify.

“I just told you that we have records to show that most of the contracts in the NDDC are given out to members of the National Assembly,” the ex-Senator said.

Meanwhile, the Acting Managing Director of the Niger Delta Development Commission (NDDC), Daniel Pondei, who also appeared before the House of Representatives committee seems to faint during the grilling session on Monday. 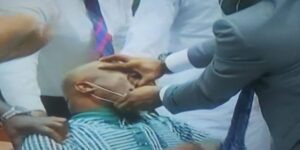 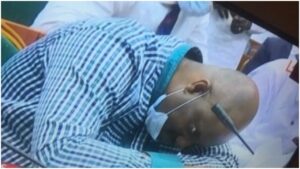 The committee is in its fourth day of public hearing as it investigates alleged financial misappropriation at the agency.

The controversy had seen strong allegations of corruption traded between the Minister and the former MD of the NDDC, Joi Nunei, who appeared before the lawmakers via Zoom on Friday.

Pondei had been grilled for over an hour when he slowly slumped over his desk, appearing to faint.

Several people present at the hearing rushed to his aid, propping him up and attempting to stabilise him, with the proceedings halted.

He then appeared to be in a seizure with a man holding open his mouth as others held him upright.

After he appeared to regain and lose composure intermittently, he was moved out of the session. 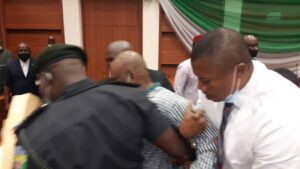 The development led to a brief discussion about the next step to take. A move to have the session adjourned was shouted before the Deputy Chairman of the Committee, Hon. Thomas Ereyi-Tobi, called for a 30-minute recess.

Lawmakers investigating corruption allegations in the NDDC had on Friday summoned Pondei and the Minister of Niger Delta Affairs, Senator Godswill Akpabio, to appear before them today (Monday) as the country sought to understand how budgetary allocations to the agency had been spent.

This is not the first time an appearance by the NDDC MD before the lawmakers will come to a halt under dramatic circumstances.

The NDDC boss had walked out on the lawmakers on Thursday, last week, after accusing the Chairman of the Committee, Olubunmi Tunji-Ojo, of being an interested party in the investigation.

He said as long as Tunji-Ojo presided over the investigation, the Commission would not get a fair hearing. He then refused to make presentations before the committee and walked out.

Angered by the move, the lawmakers resolved to issue a warrant of arrest compelling Professor Pondei to appear before the lawmakers and make a proper submission.

The lawmakers, however, decided to summon him again, and at the start of his appearance, he apologised for his action.