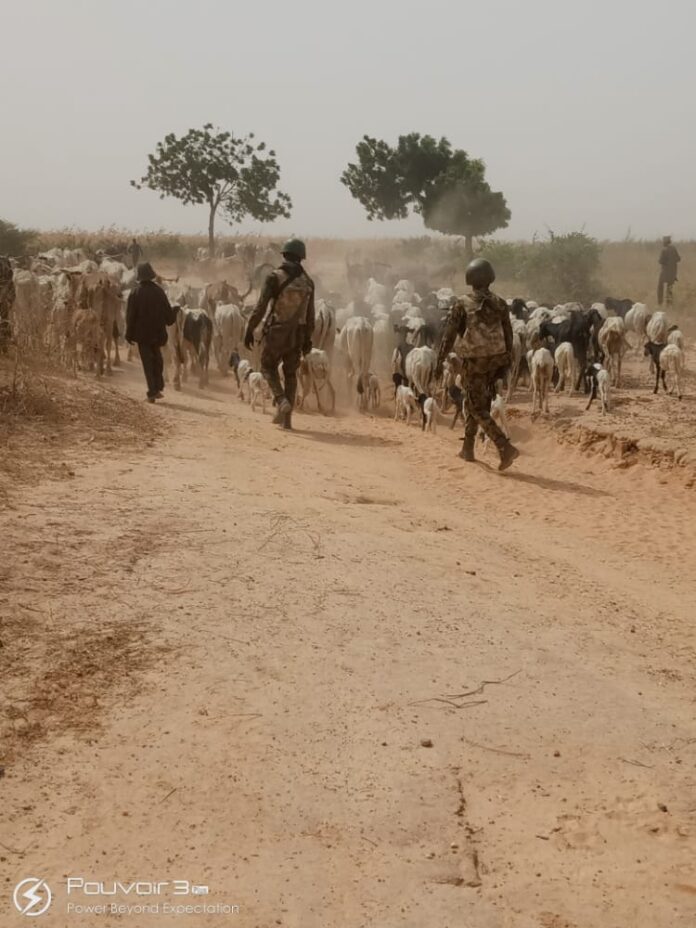 In continuation of aggressive clearance operation to stamp out banditry and sundry crimes in North-West zone of the country, troops of Operation ACCORD have recorded significant successes.

Troops of Operation ACCORD on Sunday 15 November 2020 while on Night patrol at Yar Tasha village made contact with armed bandits and engaged them in firefight, Coordinator, Defence Media Operations, Defence Headquarters, Major General John Enenche said in a statement on Monday.

“During the encounter, 3 armed bandits were neutralised while others escaped with various degree of gunshot wounds. Equally, 3 AK 47 rifles were recovered during the operation.

“In the course of operation, 10 suspected bandits migrating with rustled livestock were arrested. Upon interrogation, suspects claimed that they migrated from Zurmi Local Government Area of Zamfara State to Niger Republic.

“Suspects were arrested with 88 cows and uncomfirmed number of sheep.

According to General Enenche, preliminary investigation revealed that the victim was kidnapped at Unguwar Sa’ida village in Faskari Local Government Area.

“The victim has been reunited with his family. Currently, the gallant troops have continued to dominate the general area with patrols to provide security for locals and deny bandits freedom of action”, General Enenche stated.

He added that the Military High Command commends the gallant troops for their professionalism and encourages them to intensify the onslaught against the criminal elements in the country.