The immediate past Governor of the State, Sen. Ibikunle Amosun and governorship candidate of Allied Peoples Movement (APM), Hon. Adekunle Akinlade has sympathised with the family of the late former Minister, Sen Jubril Martins-Kuye.

In separate statements, Senator Amosun and Hon. Akinlade described the late grassroot politician as having left large footprints in the sands of time.

Amosun further expressed regret that the death of Martins-Kuye has further depleted the number of truly committed Nigerian patriots whose experience and dedication are needed at this critical time.

However, Amosun said he takes solace in the fact that the octogenarian lived a life worthy of emulation.

“Our sincere condolences to his wife, children and extended families; our people in Ago Iwoye; Ogun State stakeholders as a whole, and all loved ones left behind. We beseech Almighty Allah, swt, to forgive his sins and reward him with Aljanah Firdaus,” he said.

In his statement made available by his media aide, Azeez Adelani, Hon. Akinlade, expressed a deep sense of shock and immense sadness over Martins Kuye’s death, saying he died at a time his wealth of experience is being sought after. 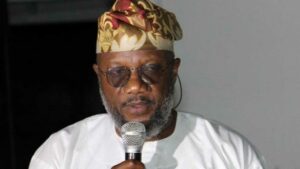 According to Akinlade, Martins-Kuye was a grass root politician, scholar and community builder, whose immense devotion has contributed to the socio-political stability of his home town – Ago-Iwoye and Nigeria.

He said: “While he will be dearly missed, I implore the Almighty God to accept his return, grant him eternal rest and give his family, friends and Nigerians the fortitude to bear the irreparable loss”.