On the night of Tuesday, October 20, 2020, barely a month that the world’s most populous black nation celebrated its 60th independence anniversary, men believed to be officers of the Nigerian Army were alleged to have shot at unarmed peaceful #EndSARS protesters at the Lekki Toll gate area of Lagos State, Nigeria, where not less than 70 people have been reported to have died and several other badly injured.

The protesters at the Lekki Toll gate, agitating for a comprehensive reform of the police as a result of human rights abuse in form of extra-judicial killings, harrasement and unlawful arrests, had stood their grounds and defied the curfew imposed by the Lagos State Governor, Babajide Sanwo-Olu on the basis that the Nigerian constitution guarantees their right to peaceful gathering and protest. 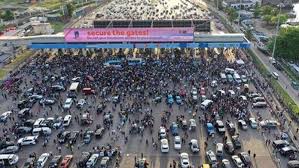 However, amidst international cries demanding that the President Muhammadu Buhari controlled Nigerian army cease shooting at unarmed peaceful protesters, the authorities in the army have denied being involved in what many now call the Lekki Toll massacre.

According to previous reports by Echotitbits, the Nigerian army debunked insinuations that it deployed forces across the country to quell the #EndSARS protest under the guise of “operation Crocodile Smile”.

In a series of tweets, the army headquarters described the allegations as “fake news”.

A video reel by Vanguard Newspaper.

On Tuesday morning, unconfirmed reports trended on social media alleging that uniformed men stormed healthcare facilities where some protesters who got injured were being treated.

Suspected killers of Arotile handed over to Nigeria police