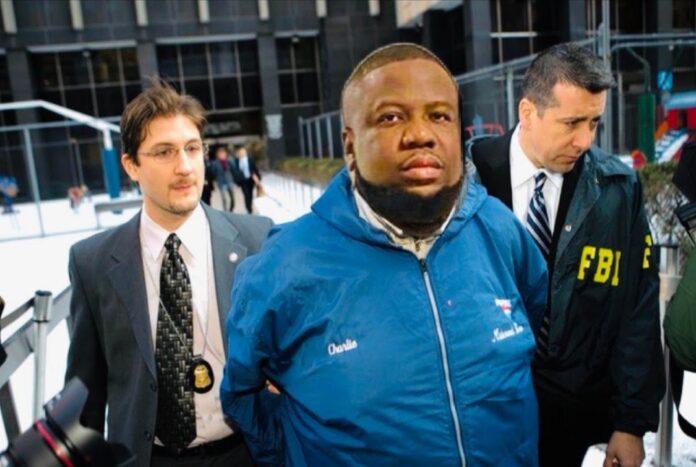 The government, in a comprehensive affidavit on Friday by the US Department of Justice, said Hushpuppi carried out business email compromise frauds that targeted US law firm, a foreign bank and an English Premier League soccer club.

The charges against Hushpuppi compiled by a Special Agent of the Federal Bureau of Investigation (FBI), Andrew John Innocent, was filed before the US Magistrate Judge, Honourable Rozella Oliver.

Though the affidavit discussed several fraudulent schemes involving Hushpuppi, it failed to disclose the identity of the law firm, foreign bank and the English Premier League club he allegedly defrauded.

If found guilty, Hushpuppi may end up spending many years in prison in the US.

The affidavit reads in part:

“RAMON OLORUNWA ABBAS is a Nigerian national living in the
United Arab Emirates (the “U.A.E.”), whose social media accounts frequently
show him in designer clothes, wearing expensive watches, and posing in or with
luxury cars and charter jets.

“The FBI’s investigation has revealed that ABBAS finances this opulent lifestyle through crime, and that he is one of the leaders of a transnational network that facilitates computer intrusions, fraudulent schemes(including BEC schemes),1 and money laundering, targeting victims around the world in schemes designed to steal hundreds of millions of dollars.

“ABBAS participated in these fraudulent schemes and money laundering in coordination with multiple coconspirators, including the persons referred to herein as Coconspirator 1 and Coconspirator 2.

“This affidavit discusses several fraudulent schemes involving
ABBAS. First, messages found on the iPhone of Coconspirator 1 (reviewed
pursuant to a federal search warrant issued in this District) reflect that ABBAS, Coconspirator 1, and Coconspirator 2, with others, committed a BEC scheme that defrauded a victim in the United States of approximately $922,857.76, including 1 BEC fraud schemes often involve a computer hacker gaining unauthorized access to a business-email account, blocking or redirecting communications to and/or from that email account, and then using the compromised email account or a separate fraudulent email account (sometimes called a “spoofed” email account) to communicate with personnel from a victim company and to attempt to trick them into making an unauthorized wire transfer. The fraudster will direct the unsuspecting personnel of the victim company to wire funds to the bank account of a third party (sometimes referred to as a “money mule”), which is often a bank account owned, controlled, and/or used by individuals involved in the scheme based in the United States. The money may then be laundered by wiring or transferring it through numerous bank accounts to launder the money, or by quickly withdrawing it as cash, by check, or by cashier’s check, approximately $396,050 that ABBAS, Coconspirator 1, and Coconspirator 2 laundered while Coconspirator 2 was in Los Angeles, California.

“Other communications between ABBAS and Coconspirator 1 indicate
that, in addition to these schemes, ABBAS and Coconspirator 1 conspired to launder tens, and at times hundreds, of millions of dollars that were proceeds of other fraudulent schemes and computer intrusions, including a fraudulent scheme to steal from an English Premier League football club.
III. STATEMENT OF PROBABLE CAUSE
A. Identification of ABBAS.

“Based on my review (pursuant to federal search warrants obtained in
this District) of data from Coconspirator 1’s iPhone and from an online account connected to that phone (the “Online Account”), other law enforcement personnel’s review of that digital data, and from discussions with United States Secret Service (“USSS”) and FBI personnel, I know the following:

“In or around December 2019, April 2020, and June 2020, I reviewed the publicly viewable Instagram account of “hushpuppi” at www.instagram.com/hushpuppi. Based on information available on the profile page, the user of that account made more than 500 posts and had 2.3 million followers as of June 2020.

“This Instagram account included numerous publicly viewable images
of a man who appeared to be ABBAS, based on comparisons to photographs of ABBAS in passports and other identification documents referenced below inparagraphs 16.c to 16.c.iv. Hundreds of these images on the Instagram account showed ABBAS in designer clothing and shoes, posing on or in luxury vehicles, wearing high-end watches, or possessing other luxury items, indicating substantial wealth.

“For example, on June 6, 2020, ABBAS posted a photograph of
a white Rolls Royce Cullinan that included the hashtag “#AllMine.” On February 27, 2019, ABBAS posted a photograph of himself in front of two vehicles, one of which he described as his new Rolls Royce Wraith. Based on review of publicly available pricing information, the starting price for each of these vehicles is approximately $330,000.

“More than two dozen images showed ABBAS in front of, on top of, or inside other luxury vehicles, including multiple models of Bentley, Ferrari, Mercedes, and Rolls Royce.

“Multiple photographs also appeared to show ABBAS posing in locations around the world (such as Dubai and Paris).” and attached. 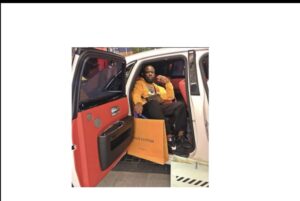 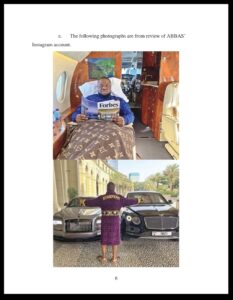 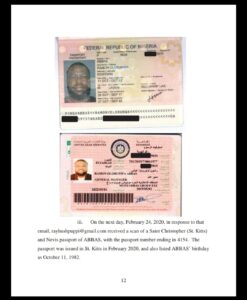 Is Senator Amosun really an “Alaseju”?