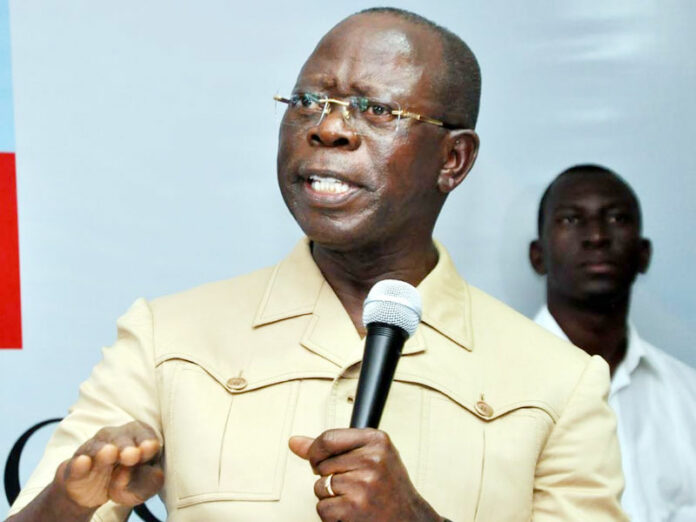 As the inauguration of the 9th National Assembly draws close, some politicians have taken a different view from that of the APC chairman, Adams Oshiomhole on how the leadership election of the Senate and House of Representatives should be approached.

Days after the public declaration by the National Chairman of the APC, Comrade Adams Oshiomhole, saying that his party has the numbers to take all the key positions of the national assembly without the help of the PDP, some politicians think it is alright to discus and negotiate with the opposition.

While responding to questions on a breakfast show in Lagos, a member of the Bauchi state House of Assembly, Ibrahim Bala Hassan said:

“Politics is all about discussions, listening to people and coming to terms with using diplomacy to agree on certain issues. So you have to agree to disagree.”

Hassan, who referred to himself as a strong party man who believes in the supremacy of the party stated that In the case of the upcoming national assembly leadership elections a number of things would happen.

Hassan noted that all candidates put forward by the APC leadership were only mere recommendations and not an imposition on the incoming 9th National Assembly.

“So Senator Ahmed Lawan and the house leader, Femi, they were not imposed, they were recommended. It is left for the two candidates to convince their colleagues that they are after the task to be the speaker and the senate president of the Federal Republic”, Hassan said.

The Bauchi state House of Assembly member reiterated that lawmakers at both the state and national level have the right to decide for themselves without being dictated to.

“Even if the party chairman, with all due respect, has his own position, as members of the national parliament we have our own opinion about how to make our party to win the leadership. We are not arguing with the chairman but there has to be a different approach’, Hassan said.

In his own reaction to the issue, the Spokesperson of the Turaki Vanguard, Chris Nwaokobia expressed worry that the concept of party supremacy, which according to him is only an element of parliamentary democracy, is imported into a presidential democracy like Nigeria’s.

Nwaokobia said “Very often you hear people in presidential democracy talk about party supremacy, you wonder what information they are leaving our children with. Party supremacy is primarily a dogma of parliamentary democracy.”

Nwaokobia explained that “the party, based on how we practice our democracy appears to be supreme. But in a presidential democracy, that is why when you talk about the leader of the APC, you talk about either President Muhammadu Buhari or Asiwaju Bola Ahmed Tinubu, you are not calling the chairman.”

To drive home his point that the idea of party supremacy that is being sounded aloud by the APC National Chairman does not hold in Nigeria’s presidential democracy, Nwaokobia made effort to distinguish the parliamentary democracy.

He said: “I’ll give you a practical example. You do not perhaps know the name of the Democratic Party chairman in the United States of America, the name of the chairman of the Republican Party, even in Ghana. This is because they run a presidential democracy.”

It is simply about the people. I am not saying that the party position should not be respected. In parliamentary democracy basically, the party that wins forms government and follow in totality the ideology of the political party”, he explained.

Chris Nwaokobia also stated that while the APC chairman, Adams Oshiomhole insists on having APC members taking over all leadership positions at he National Assembly, he advises that the Nigerian people and the nuances of governance under the country’s current presidential democracy should rather be supreme.

I am not throwing away the fact that the party has policies of programmatic that it needs the speaker and the senate president to push. But I am saying that the grand standing, the headmaster-pupil proclamation of the chairman of the APC, the nuances and body language of the APC does not run in tandem with the normative of presidential democracy”, Nwaokobia said.