During the inauguration ceremony in Akure, the state capital , Governor Akeredolu expressed delight with the performance of the pioneer Amotekun corps officers, who recently completed their training.

In his remark, the Governor urged the corps officers to put to good use the knowledge gained from the training to ensure security of life and property in the state.

Akeredolu who pleaded with the Federal Government to allocate more fund for equiping the police, explained that the Amotekun Corps is designed to support the existing security framework in the state.

Stressing that with a workable synergy among the leadership of the security agencies and that of Amotekun, the Governor expressed confidence that a water-tight strategy capable of arresting crimes even before they occur could be achieved.

At the ceremony, the Governor commissioned some equipment that will aid the effective operation of the corps officers, including vehicles, motorcycles, and other communication gadgets.

In his remarks, the Commander of Ondo State Amotekun Corps, Ade Adeleye commended Governor Akeredolu for making the dream of the security outfit come alive.

Adeleye said that the Amotekun Corps was a child of necessity born out of the need to explore other means of securing communities across Ondo State. 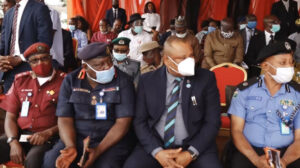 Ondo is the latest Southwest state in Nigeria to inaugurate its own command of the Amotekun Corps, which came to light by the determination of Governors in the region to tackle growing insecurity.

The governors of the Southwest met and agreed to establish a security outfit that will support the security framework of the region.

At the early stage, the plan to own a regional security outfit was greeted with mixed reactions, while some persons said it was a good idea, others believed Amotekun is a ploy to decentralize the police through the back door.

One of the worries of those against the security outfit was that Amotekun will be a tool in the hands of politicians to fan their self-interest.

On the ground of a number of concerns, the Federal Government frowned at the Soutwest governors and even went ahead to declare illegal, the establishment of the security outfit.

In a communique in January 2020, Special Assistant, Media and Public Relations (Office of the Attorney-General of the Federation and Minister of Justice), Dr. Umar Jibrilu Gwandu declared on behalf of government that “The setting up of the paramilitary organization called “Amotekun” is illegal and runs contrary to the provisions of the Nigerian law”.

The Federal Government maintained that “the Constitution of the Federal Republic of Nigeria 1999 (as amended) has established the Army, Navy, and Airforce, including the Police and other numerous paramilitary organisations for the purpose of the defence of Nigeria”.

The Federal Goverent’s initial resistance to the regional security outfit led the Southwest governors to meet the President, which resulted in unanimous resolutions that allowed states in the region to proceed with Amotekun.

The resolutions include: That the structure of Amotekun should align with the Federal Government’s community policing strategy; that necessary legal instruments be put in place by each state to give legal backing and regulatory measures to Amotekun. 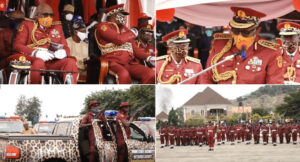 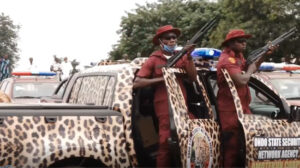 Monopoly gets association as Lagos inaugurates sports board