Nigeria’s Minister of Transportation, Rotimi Amaechi has assured that the delay in the competition of the $1.6 billion Lagos-Ibadan rail project was not due to a challenge of fund.

According to a statement by the Director, Press and Public Relations, Ministry of Transportation, Eric Ojiekwe,  Amaechi gave this explanation on Saturday during an inspection tour of the project, in company of Information and Culture Minister, Lai Mohammed.

stating that the delay was  rather due to lack of workers on site.

Amaechi clarified that rather than a fund problem, the delay was due to lack of workers on site.

Echotitbits gathered from the Ministry’s statement that the outbreak of Coronavirus pandemic in Nigeria caused the over one billion dollar project to pause.

The minister, was however said to have tasked the contractor handling the -Ibadan Standard Gauge Rail, Messrs China Civil Engineering Construction Company (CCECC), to complete the project within five months.

The minister, who reckoned that COVID-19 had come to stay, urged the contractor to develop measures such as making personal protective equipment for their workers so as to complete the project within the stipulated time frame.

He added that safety measures such as compulsory use of masks and safety shields should be provided for the workers across the sites of the project.

Also stated was the reason why the Ibadan-Kano $5.6 billion rail was yet to commence. The minister, assuring that the project remained a priority of the President Muhammadu Buhari-led administration,  stated that a loan facility from China Export-Import Bank, meant to commence the project was yet to be processed by the Federal Government.

Ameachi’s co-minister in the Ministry of Information and Culture, Mohammed, commended efforts made so far on the project: “I am very impressed. This is the reason why we are borrowing the money so that Nigerians can travel in dignity and comfort”.

Reacting to public outcry over government’s borrowings over the months, Mohammed explained that monies borrowed were not for grandiose display nor for overhead or running costs for the nation but rather for capital projects which on completion would create jobs and provide needed infrastructure for Nigerians.

Mohammed added that borrowing for infrastructure and improved service delivery for the people isn’t bad.

While also urging the contractor, CCECC not to disappoint on the project, Mohammed commended Amaechi for driving the project with passion.

Also, the Managing Director, Nigeria Railway Corporation (NRC), Fidet Okhiria, revealed that the corporation was already working out modalities so as to commence operations on the Lagos-Ibadan and the Itakpe-Warri rail corridor in September.

Video: Another ‘Trade War’ is Brewing Between Nigeria and Ghana 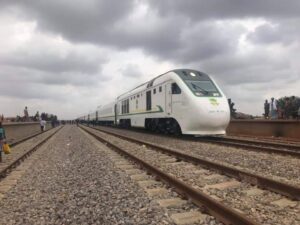 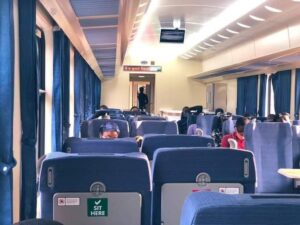 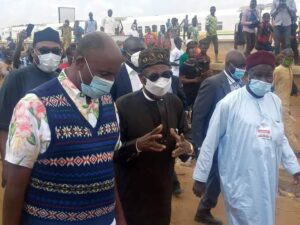 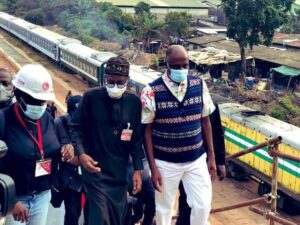