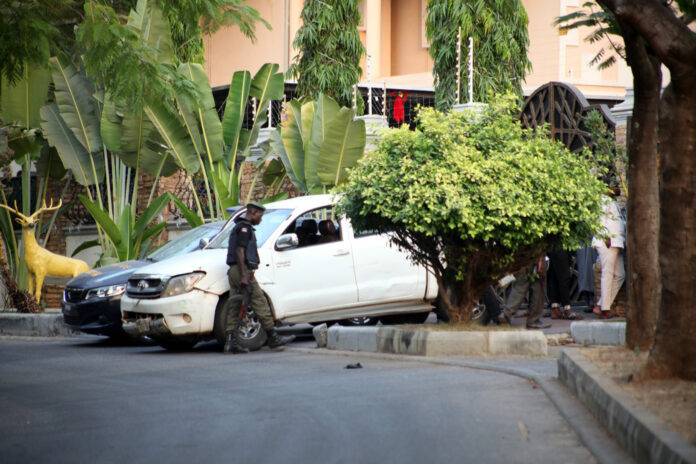 Dino’s brother, Moses Melaye who spoke about the Senators’s plight on Wednesday during a TV programme monitored by Frontpage.ng accused the police of an illegal take-over of the home of a serving Senator of the Federal Republic of Nigeria.

Melaye stated that the police under Inspector General of Police Ibrahim Idris are bent on making the life of his brother a ‘living hell’ having tried to arrest the Senator severally in 2018. He also reacted to the allegation of complicity in the murder of a police sergeant, Danjuma Saliu, which happened in July 2018.  He berated the police for lying, saying no member of Dino’s entourage (thug) shot at any police officer. He said the allegation is unfounded and untrue.

Melaye said:  “When injustice becomes a norm, resistance becomes a duty. This government and the police have made the life of my brother Senator Dino Melaye a living hell for the past few months.

“The case they are raising against him happened in July, I was there. The policemen shot at us; my car has over two bullet holes. So how can they turn around all of a sudden that we were the ones shooting at the police? Our police and security men have been taking away since over seven or eight months ago. So how do we now become the person shooting? That story is not true and unfounded”, he said.

The brother to the embattled Senator further stated that: “Because of the injustice on a daily bases, we cannot trust or believe anything they say or they do. I believe they are out to harm my brother, if not what is the desperation? American police protects lives, Nigerian police takes lives everyday…they came into the compound arrested the security man, beat him up, handcuffed him, the cleaner, the same thing.”

When asked about the current location of his brother (Dino), Moses Melaye denied having any knowledge of where the Senator might be. He claimed the Police took over the Maitama residence without an arrest warrant and dislodged family members and staff who live with the Senator.

“I cannot confirm categorically because they did not allow anybody into that compound. They shut his house; they are the one opening gate and closing gate, there are dogs in that house, we have cook, my parents are supposed to be in that house as we speak. Dino is not the only occupant of that house. So we don’t even know, they did not allow anybody, family members or staff into that house. We are going to hold the police and the government of Buhari responsible if anything happens”, Melaye said.

In the same vein, a lawyer and member of the ruling All Progressives Congress (APC), Daniel Bwala believes that both parties are overdramatizing the situation.

Bwala said: “I don’t know why the police will lay siege for a number of days. When you have a search warrant or warrant of arrest, what you will need to do is when you go to the place if the person does not surrender you break into the house, make the arrest where necessary and leave the place. In other words, in less than a day, they ought to have performed the arrest they wanted to perform so that people like Dino’s brother, mother and other family members will not suffer for the sins of Dino, whom by law is presumed innocent until proven guilty.

“On the other hand, everyone knows that Dino is a dramatist. Otherwise, the constitution is clear about your fundamental right. It states in clear terms, anybody who alleges that his right is being infringed, or has been infringed or about to be infringed can approach the court for the enforcement of his fundamental rights”, Bwala said.

The lawyer stated that Dino ought to have approached the court rather than resort to self help. He further noted that: “To evade arrest when you are aware that the law enforcement agencies are demanding your attention in itself is an offence. So when you look at the combination of the activities, on the part of the police, you will see that they are overdramatizing it. Now they have met with a super actor and the whole thing now is unnecessary for the Nigerian nation.

“I think that the Inspector General of Police should make a decision, if you want to arrest Dino, you know what to do. So to lay siege in front of the house of a private citizen for days as if he’s a terrorist who has come to overthrow the government of Nigeria is unnecessary” he stated.

Meanwhile, the Peoples Democratic Party (PDP) where Senator Melaye belongs has described the incident as unfortunate and against norm.

In his reaction, a PDP Presidential Campaign Spokesperson, Sanni Umar claimed that the police is biased and is not being fair in the matter since the case against the Senator involved their own.

Umar said: “This is an abuse of state power. The police are an interested party in this matter. They are investigating over the shooting of one of them. So the police is not expected to be fair and equitable.”

He said further that: “There are other motives by the police. Someone who is being looked for since July, why is it taking this time for the police to now make a manhunt for him clearly knowing that elections are approaching.

“This is not unusual of the police. The police has done that with Senator Ademola Adeleke, when it was only 2 days to Osun election, they now preferred charges of forgery and other things to take him to court. This is to demoralize him and his supporters, to intimidate him and his party and this is not acceptable”, Umar said.

On Wednesday, Dino Melaye said via his twitter handle that he will not surrender to the police because he fears the Inspector General of Police will inject him to death.

Latest report however indicates that a Federal High Court sitting in Abuja this Thursday has denied Melaye’s request to have the police vacate his residence and stop its officers from making further attempt at his arrest.

In the ruling given by Justice N. E. Maha, the court refused the ex-parte application by the Senator but ruled that the substantive matter be granted accelerated hearing.

Buhari’s aide tells Oyedepo – Abide by CAMA or manufacture your...