All Progressives Congress governorship aspirant, Pastor Osagie Ize-Iyamu has emerged the flagbearer of the party in the September 2020 Edo election.

Ize-Iyamu, who has been touted as the preferred candidate by political observers was declared winner of the primary election by Imo state Governor, Hope Uzodinma after the end of the exercise on Monday.

Ize-Iyamu, a former 2016 Edo governorship candidate in the Peoples Democratic Party (PDP) was said to have won the direct primary election with a total of 27,838 votes to defeat Dr. Pius Odubu who scored 3,776 and Osaro Obazee who got 2,751 votes.

Meanwhile, an Acting Chairman of the party, Victor Giadom has distanced himself from the primary election held within the APC Edo chapter on Monday.

The letter dated June 18 and sighted by Echotitbits indicates that the erstwhile National Secretary of the APC, Giadom, who leveraged a court judgement in his favour to declare himself as the Acting Chairman of the party wrote to inform the Chairman, Independent National Electoral Commission (INEC) that the exercise lacks authenticity.

Read more in the letter below: 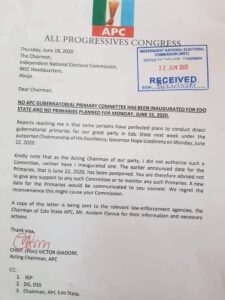