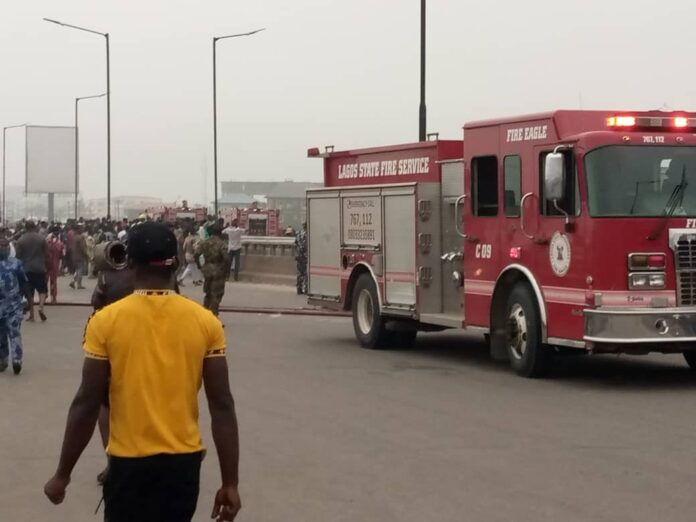 The Lagos State Fire Service has explained how it successfully averted an escalation of a fire explosion involving three tankers and one trailer on Kara Bridge along Lagos-Ibadan Expressway in the early hours of Sunday.

Speaking on the incident, the Acting Head, Lagos State Fire Service, Mrs. Margaret Adeseye, said the quick and timely response by the agency ensured that the fire disaster was effectively contained before it escalated.

“Lagos State firemen responded to a fire call at about 0046hrs on Sunday, 21st June, 2020 at Kara Bridge and quickly reached the location where some vehicles were already engulfed by fire.

“Nevertheless, our firefighters were able to contain the situation from escalating before it was finally extinguished a few hours later.”

Adeseye added that one of the tankers involved was conveying gas, while two others were filled with Premium Motor Spirit (petrol).

She explained that the firemen were on standby until the gas leakage from one of the vehicles in the accident stopped in order to avert further havoc and chaos.

“The fire incident was a delicate operation that required the use of chemical foam compound to avoid explosion,” she noted.