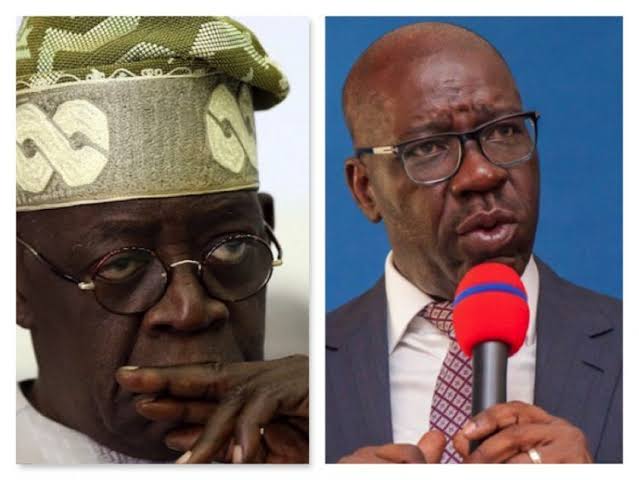 Ahead of the September 19 guber poll in Edo State, National Leader of the All Progressives Congress (APC), Asiwaju Bola Ahmed Tinubu, Tuesday described the Peoples Democratic Party (PDP) governorship candidate in the state, Governor Godwin Obaseki, as a dictator who does not appreciate democratic values.

Tinubu, a former Lagos State governor, said Obaseki lacks democratic qualities because he has not been part of any known struggle towards the entrenchment of democracy in Nigeria.

In a sponsored video which was aired on TVC, APC chieftain accused Edo State governor of going against the ideals of democracy by “preventing” some lawmakers of Edo State House of Assembly from being sworn in.

To this end, Tinubu charged electorate in Edo State to reject Obaseki and vote massively for the governorship candidate of the All Progressives Congress (APC), Osagie Ize-Iyamu.

According to him, “I want to appeal as a committed democrat and a leader of all democrats to our conscience and commitment to democracy on the forthcoming election in Edo state, to reject Godwin Obaseki.

“I have suffered with many others to bring about this democratic regime that today we are enjoying in the country. Then, Godwin Obaseki didn’t participate in any aspect of the struggle to enshrine democracy in the country.

“Therefore, he could not understand the value and the pains associated with this democratic struggle…

“Today, he now comes back as a democrat wanting you to vote for him. Please, I appeal to you, reject him. Like he rejected the 14 members, you should reject him at the polls.”

Ironically, Tinubu was among APC chieftains that campaigned and endorsed Obaseki when he was contesting for the same position four years ago.

But, Obaseki had to dump APC for PDP after losing the governorship ticket to Ize-Iyamu.

in a reaction, Governor Obaseki, who Spoke in a statement on Tuesday through his Special Adviser on Media, Crusoe Osagie, said Edo voters are determined to end godfatherism in the state.

“Our attention has been drawn to a television broadcast in which a former Lagos State Governor and chieftain of the All Progressives Congress (APC), Asiwaju Bola Ahmed Tinubu, in his quest to extend his political dominance and empire to Edo State, decided to take over the role of Edo people to choose through the ballot who to govern them for the next four years,” he said.

“It has become obvious that the spirited fight which Edo people have put up against godfatherism has sent tremors beyond the shores of Edo to the likes of Tinubu, who has for years sustained a stranglehold on Lagos and other states in South Western Nigeria, hence this desperate, last ditch effort to rescue the unproductive political instrument, now popularly referred to as godfatherism, with which he has feathered his nest and built his political empire at the expense of the people.

“Tinubu knows clearly that come September 19, when godfatherism would have been dismantled in Edo State, the people of Lagos may just have found the recipe and formula for removing the chokehold placed on their collective destinies for decades by Tinubu, hence the inciting television broadcast.

“He should take note that Edo people do not yield their will, liberty and power of choice to oppressive figures because they are perceived to have economic and political means. Like one of the great sons of Edo, former Governor and former National Chairman of the APC, Chief John Odigie-Oyegun, recently said, our people do not give in to ‘primitive loyalties.’ We always chase noble causes and a little study of our history, should show Tinubu the indomitable spirit of the Edo person.

“Edo stands in the heart of the old Midwestern Region, which was the only region created through plebiscite, which underscores our capacity to determine our destiny as a people. The blood which ran in the veins of the leaders of that time is still the same that runs in the vein of the leaders of Edo State today”, he said.

The PDP candidate however, appealed to residents of the state to disregard Tinubu’s comment and cast their vote for him.