Federal Medical Centre (FMC) in Yola, Adamawa State has successfully operated and separated another co-joined twins, thereby increasing the tally to three the number of co-joined twins victoriously separated in the hospital.

The Prof. Auwal Abubakar-led medical team at FMC Yola said the latest successful separation surgery was as a result of collective efforts of medical professionals as well as support received from various quarters, including the Nigerian Air Force (NAF).

Abubakar, a Professor of Paediatric Surgery, recounted that the twins, Mercy and Grace Aiyebemi, were delivered on December 12, 2019, through a cesarean section in Bayelsa State and were taken to FMC in Yenagoa after they were identified to be conjoined and were stabilised.

He said the co-joined twins were discovered to be joined at the abdomen, had many separate organs but shared only one liver, explaining that the team of surgeons have to go around this challenge, which culminated in the successful surgery of August 20, 2020.

With supports from governments and well meaning Nigerians, FMC in Yola took care of the co-joined twins free of charge and also carried out the surgery free of charge.

The co-joined twins, who were airlifted on January 2, 2020 from Yenagoa, Bayelsa State to Yola via NAF aircraft, were separately brought back to Yenagoa onboard a NAF Beechcraft KingAir 350i aircraft on August 29, 2020.

It was a moment of joy, jubilation and triumphant entry as the twins along with their parents, Raphael Aiyebemi and Godsgift Ibiyyefa, returned to Yenagoa after a successful separation surgery at FMC in Yola.

LAWMA Gets Another MD/CEO, One Year after Gbadegesin Assumed Office

They were received on arrival by Bayelsa State Deputy Governor, Lawrence Ewhrudjakpo, as well as other members of Bayelsa State Executive Council and the Chief Medical Director (CMD) of FMC Yenagoa, Dennis Allagoa, who all expressed their appreciation to the Chief of the Air Staff, Sadique Abubakar, and the entire NAF family for the humanitarian airlift as well as the support provided throughout the process.

It would be recalled that FMC in Yola had successfully carried out similar surgeries in 2013 and 2018. 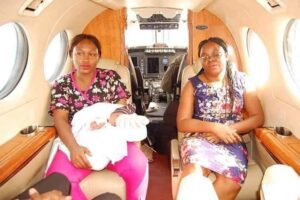 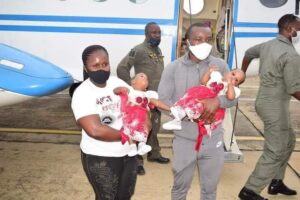 Abiodun Mourns Buruji Kashamu, Describes Him as a Large-hearted Politician and...