Lagos State Government has promised to focus its immediate attention on the evacuation of silts removed from all cleared drains in the state.

This was coming as Lagos State Building Control Agency (LASBCA) disclosed that there was a partial building collapse at 6, Olonode Street, Alagomeji in Yaba, in the early hours of Monday due to the heavy rainfall in the area. 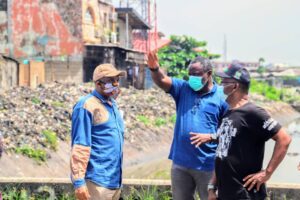 Addressing journalists after the second round inspection tour of ongoing drainage project sites in Surulere, Lagos Mainland and Somolu local government areas, Lagos State Commissioner for the Environment and Water Resources, Mr. Tunji Bello, said findings have shown that several drainage channels, which had been cleared in the past, are quickly filled with dirt again due to non-evacuation of the silts in time.

He assured that work is ongoing at various canals and drainages in order to ensure the free flow of wastewater. 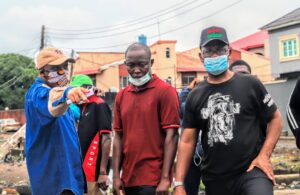 “This is the second phase of the inspection tour we commenced last week. It’s an ongoing process. The inspection is based on the directive of Governor Babajide Sanwo-Olu that the ministry’s officials must continuously go out to monitor closely and ascertain the level of work being carried out by the contractors assigned to clean these canals,” Bello said.

The commissioner added that the Sanwo-Olu administration has been able to reduce indiscriminate waste disposal by residents to an appreciable level, noting that the government would not relent in performing its responsibilities of maintaining flood-free, clean and hygienic environment in Lagos State.

Bello was accompanied on the inspection tour by the Special Adviser Drainages, Joe Igbokwe, and Permanent Secretary, Lekan Shodeinde.

While expressing satisfaction with the level of work at most of the project sites, he noted that the attention of project contractors has, however, been called to few noticeable lapses in some areas.

On the other hand, the commissioner expressed dissatisfaction with the level of work done at Fatai Kadiri Drain (Opeyemi Fola-Agoro Collector Drain), demanding that contractors should revisit the area for more dredging, while they should immediately remove some of the culverts that were wrongly positioned.

Meanwhile, a building has suffered partial collapse in Yaba area of Lagos due to heavy rainfall.

Speaking on the incident, LASBCA General Manager, Engr. Biola Kosegbe, said the collapsed building was a three-floor structure and had previously been identified, sealed and marked for demolition, while all occupants had been evacuated by the agency before the unfortunate incident.

“The structure, which had hitherto failed the integrity test carried out by the agency, had been earmarked for removal by LASBCA. With the latest development, the officials of Lagos State Emergency Management Agency (LASEMA) have commenced the immediate demolition of the building to prevent any loss of lives,” she said.

Kosegbe urged owners of old buildings in the state to, as a matter of urgency, ascertain the level of structural stability of their property to avert collapse, most especially with the present raining season.

The general manager explained that statistics has shown high incidence of building collapse during this period.

Kosegbe maintained that the present administration would leave no stone unturned in sanitising the building construction industry removing all illegal or distressed buildings, as well as structures that are not in conformity with the state building laws, regulations and standards.

She reaffirmed the commitment of the agency in ensuring that all building owners as well as developers across the metropolis comply strictly with all regulations and safety precautions, in order to prevent or reduce the occurrence of building collapse in the state.

Barely 24 hours after he presided over the National Security Council at the Presidential Villa, Abuja and later addressed the nation, President Muhammadu Buhari...