Minister of Justice and Attorney General of the Federation, Abubakar Malami, Friday directed the Inspector General of Police, Mohammed Adamu, to provide security for the 17 lawmakers of the All Progressives Congress (APC) in Edo State.

Malami, in a letter dated August 5 based on a petition to his office by Idahosa-West Chambers, said the security measure has become necessary to prevent breakdown of law and order.

The 17 lawmakers, who are supporting APC governorship candidate, Osagie Ize-Iyamu, have been locked in a battle to access Edo State House of Assembly complex on Ring Road, Benin against seven legislators loyal to Governor Godwin Obaseki. 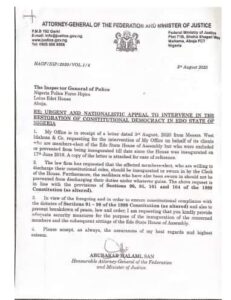