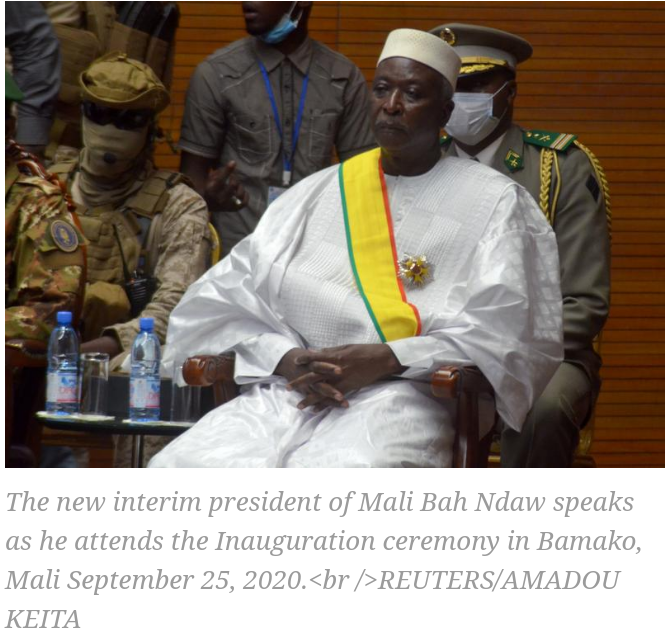 According to a statement on Tuesday, the Economic Community of West African States (ECOWAS) said it was ending the sanctions.

“Heads of state and government have decided to lift sanctions” after noting positive steps towards a constitutional government” the statement read.

For many months, agrieived opposition and civil groups campaigned for the removal of Keita, a situation that finally led to a coup by the nations military.

The bloodless coup in the landlocked nation was not well received by the 15-nation group, fearing that a polarised nation under a military rule might further pose security and instability in the region and so imposed tough sanctions against one of Africa’s poorest countries.

A coup in 2012 was followed by an uprising in northern Mali which morphed into a bloody Islamist insurgency, claiming thousands of lives and threatening neighbouring Niger and Burkina Faso.

The ECOWAS sanctions, imposed on August 20, included border closures and a ban on commercial trade and financial flows but not basic necessities, drugs, equipment to fight coronavirus, fuel or electricity.

Despite this, ECOWAS insisted on the publication of the transition roadmap and warned it could not accept junta leader Colonel Assimi Goita, who is interim vice president, as Ndaw’s potential replacement.

The bloc has now taken into account “notable advances towards constitutional normalisation,” according to a French text of Tuesday’s statement, signed by President Nana Akufo-Addo of Ghana, who currently chairs ECOWAS.

It also called on “all bilateral and multilateral partners to support Mali.”

The communique also called for civilian and military officers detained during the coup to be released, and for the junta, which calls itself the National Council for the Salvation of the People (CNSP), to be dissolved.

The statement was issued a day after Ndaw appointed a government, headed by former foreign minister Moctar Ouane, in which junta members occupy key positions.

The “charter” also sets down the goals of re-establishing security across the nation, two-thirds of which are outside government control; of “restoring the state”; and of staging general elections, The Guardian reports.