Ogun State Governor, Prince Dapo Abiodun, on Thursday swore-in the Chairman and members of the State Independent Electoral Commission (OGSIEC), with a promise to leave behind a vibrant democratic arrangement that would outlive his administration.

Speaking at the swearing in ceremony held at the Executive Council Chambers, Governor’s Office, Oke-Mosan, Abeokuta, Governor Abiodun underscored the need for the body to exercise restraint and uphold high ethical standard to midwife a local government system based on the principles of fair, credible and democratic electoral process.

The governor said the inauguration was a symbolic demonstration of his administration’s commitment to ensure democratic dividends get to the grassroots through electoral processes at the local government level.

“We on our part, will continue to exert all our inclusiveness approach to fast track socio-economic development and social wellbeing of our people. What we are doing today is a part of that process; rebuilding our electoral system and values as well as strengthening other tiers of government to be at its best. 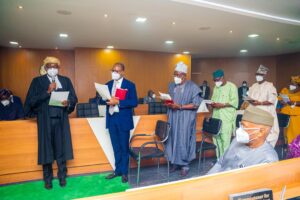 “We are determined to leave behind a vibrant democratic arrangement in our State that will outlive this administration. This will ensure that we have good Leadership at all levels which in turn ensure all round development for our State”, he said.

The Governor described election as an integral part of the norms and values of the modern world political civilization, pointing out that the absence of transparent, free and fair elections has contributed to the instability witnessed in some societies around the world.

His administration, Governor Abiodun maintained, would continue to provide conducive environment for the conduct of free and fair election at the local government, calling the Commission to put in place an effective machinery to ensure the people at the local government are provided adequate platform to exercise their right in electing their leaders.

While congratulating the members of the Commission for heeding the call to serve, the Governor reminded them that they should see their appointments as a clarion call to serve, urging them to introduce innovative and resourceful approach for the conduct of free and fair election at the local government level.

According to him, “the people of our State await your total commitment in sustaining the positive development of the electoral system in line with global best practices. Shun all acts of nepotism, favouritism, corruption and such negative acts which could impart negativity on our duties”. 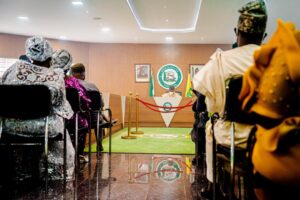 Responding on behalf of other members, the Chairman of the Commission, Babatunde Adetona Osibodu stated that the commission under his watch would serve with humility, adding that members of the commission recognises the responsibility placed on them and are ready to succeed as a team.

Osibodu pledged that the Electoral Commission would conduct a free and fair election that would not only be a benchmark for the state, but the country as a whole, stressing that the Commission would carry along all relevant stakeholders towards ensuring a successful local government election.

Another bandit attack in Kaduna as troops rescue 307 students from...