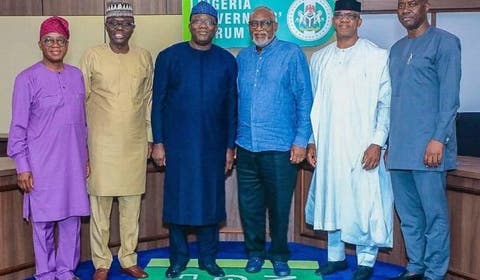 Security lapses occasioned by the unrest that followed EndSARS protest by Nigerian youth, who demanded government put an end to police brutality and extortion, has put Governors in Nigeria’s South-West on their toes to ensure that the security architecture of the region improves.

The Governors met on Sunday in Lagos to strategise on how to secure the South-West as the aftermath of the EndSARS protest, highjacked by hoodlums who unleashed mayhem nearly collapsed security apparatus in the region.

News Agency of Nigeria (NAN) reported that In the opening remark of the Chairman, South-West Governors’ Forum, Governor Rotimi Akeredolu (Ondo State), it was stated that the region had gone through a lot in recent times.

Governor Akeredolu said that when the EndSARS protest started in the South-West and other parts of the country, the police were guiding the protesters.

He said that what started as a peaceful demonstration by the youths eventually turned to a different thing, NAN reported.

“In the recent past, our experience has been most worrisome, everybody is worried, everybody is concerned, we have to sustain the peace we have started noticing.

“We are worried. What we are seeing in the last days shows that something needs to be done,´´ Akeredolu said.

“What we have witnessed in the South-West is a great attack on our heritage. We must have collaborate across the board. We need the cooperation of the Federal Government so that this does not repeat itself,´´ the Ondo governor said.

He urged the governors to be up and doing in their duties, adding that the welfare of the people was paramount.

Sanwo-Olu said that over 500 vehicles, both public and private were destroyed, hospitals, monarch palace, among others, were not spared.

In his address, the Chief of Staff to President Muhammadu Buhari, Prof. Ibrahim Gambari, said the meeting was for those in government to retrace their steps and have a rethink of a better way to engage the youths more to prevent their restiveness.

Gambari noted that President Buhari was aware of the level of destruction to private and public infrastructure in Lagos.

He reiterated the federal government’s commitment to addressing the many challenges and demands of the youths in due course.

US President Elect Will Have Challenges No Incoming President Ever Has

The meeting was also attended by the Minister of Information and Culture, Lai Mohammed, his works and housing counterparts, Babatunde Fashola, Minister of Interior, Rauf Aregbesola, among others.