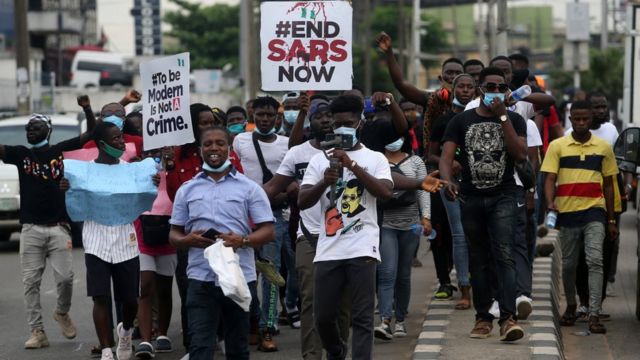 Have you ever found yourself in a situation where you wish you had done the comparatively little thing someone had asked of you instead of dilly dallying to the point when the person vexes and says, “forget it, now I want it all?” Or, “I’m not even doing again?” If government had adequately tackled the SARS issue after repeated complaints by the people in the past, the current crisis may never have occurred. Now, the government has come out to propose a new outfit, giving assurances on how they’ll operate strictly by the book but with a loud voice the people have responded, “this is not enough! We want more.”

In a small segment on CNN titled CNN Modern Explorers, I heard Bertrand Piccard, a Swiss psychiatrist and arguably the world’s most famous balloonist, say something remarkably profound. For a man who happens to be the first to ever circumnavigate the globe non stop in a hot air balloon, I was surprised to hear him remark that the modern day explorer is not one who searches out new territories but instead is one who seeks new ways to bring better meaning to human existence and improve the quality of human life. It surprised me to no end that a man who also holds the record of being the first to successfully fly around the world in a solar powered plane, would relegate the thrill and novelty of such an astonishing achievement to second place, in terms of his motivation. The impetus that drove his ambition can therefore be better traced to finding ways to surmount issues which trouble the wellbeing of much of humanity than to discovering new frontiers. His submission gave me a refreshingly new perspective to Edmund Burke’s quote which says, “The only thing necessary for the triumph of evil is for good men to do nothing”.

Following the embarrassingly acrimonious US Presidential debate between President Trump and former Vice President Biden which took place recently, and where Trump, in typical Third World dictator-style, seemed to be preparing the electorate’s mind to the possibility of him not accepting the election results, Thomas Friedman offered the country a stark warning. He said, “when extremists go all the way, and moderates just go away, the system can break.” He based this on what he witnessed as a foreign correspondent when he covered Lebanon’s second civil war. While not repudiating Mr Friedman’s submission in any way, kindly permit me to direct this statement to the Nigerian situation in a way that’s relevant to this discourse.

For the sake of this article, let’s apply the “extremists” term to those who go all out to make sure they grab political power at all cost in Nigeria. The often better qualified in terms of character, ability and noble intention, whom we can refer to as moderates, on the other hand, refuse to struggle and are not given to making any sacrifices for what they want; and what the country obviously needs. Unwisely, they remain in the shadows. They “go away” as it were and when the time comes to vote, they either don’t bother to vote or finding themselves faced with a lack of credible alternatives, they end up voting for one of the very same people who put us all in this mess in the first place. Funny thing is that that won’t stop them from complaining when the leopard proves he’s still a leopard and is unable to change his spots. And the sad cycle continues. It was Christian D. Larson who once said that, “To keep any great nation up to a high standard of civilization there must be enough superior characters to hold the balance of power, but the very moment the balance of power gets into the hands of second-rate men and women, a decline of that nation is inevitable.”

Rafael Nadal, my favourite tennis player, is a phenomenon by any standard. Born right handed but converted to left handed as a child by his uncle and coach,Tony. Uninhibited by any cultural or social considerations, uncle Tony, as he’s fondly called, made what could only be described as a cold and very incisive calculation. Having done extensive research, he discovered that left handed tennis players proved very difficult and tricky to play against and so he set about his plan to convert his young nephew, who had shown visible promise and who undoubtedly possessed an impressive tennis brain, into a left handed player. He wasn’t wrong. Because of that singular move, Rafa escaped the distinct possibility of growing up to become a good but forgettable right handed tennis player to becoming a living legend. His uncle’s gamble paid off. To prove it, he recently equalled Roger Federer’s record of winning 20 Grand Slams. That’s an extremist right there, if ever I saw one. His motivation however is infinitely more noble.

The one track minded, vigorous, unrelenting pursuit by our second-rate men to ensure they fill all meaningful decision making positions in our political space and the complicit, lackadaisical attitude of our most competent men, tilted the balance of power to the detriment of our society a long time ago. But are we currently witnessing the precursor to a seismic shift? Is this the eve of a new day? I guess only time will tell.

If we’re to be guided by those who went before us though, it may appear fitting to close with the timeless words of one of history’s most revered freedom fighters, Martin Luther King Jr who cautioned, “In the end, we will remember not the words of our enemies, but the silence of our friends.” When all the proverbial dust settles, I hope those without a voice won’t turn on those of us who do, but were never seen or heard to have used them. There’s something I’ve always said and it’s this. The problem isn’t that people don’t know what the problems are, it’s that they don’t see themselves as part of the problem. Ponder on that for a moment. We all have a part to play.

#ENDSARS….what do they say about an idea whose time has come? It’s unstoppable!!!

Changing the nation…one mind at a time.

Oladapo Akande is a Surrey University (UK) English graduate with a Masters in Professional Ethics. He’s an alumnus of the National Institute for Transformation and a two time author; The Last Flight and Shifting Anchors. He writes from Lagos.