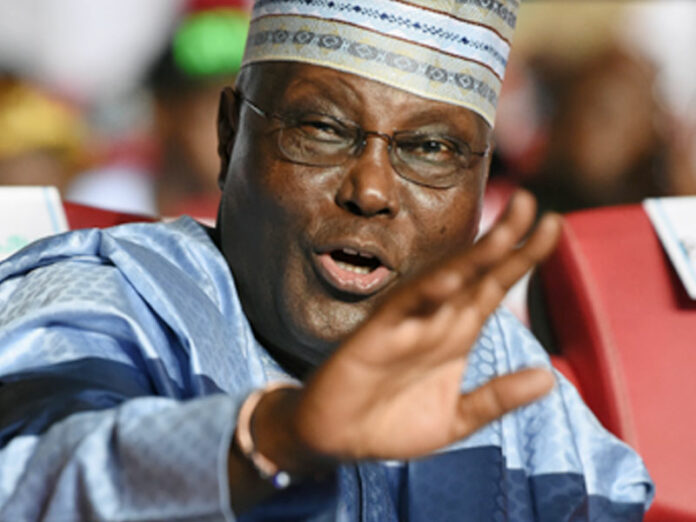 The presidential candidate of the People’s Democratic Party (PDP) in the 2019 election, Atiku Abubakar has reacted to President Muhammadu Buhari’s refusal to assent the Electoral Act 2018 Amendment Bill. Atiku, who appears to be the main opposition to Buhari’s reelection bid, expressed doubt about the President’s commitment to free and fair elections in 2019.

The former vice President made his position known on Friday via his Twitter handle: “Mr. President, assurances that your administration will conduct free, fair and credible elections cannot be taken seriously. For Nigerians and especially us in the opposition, you just missed an opportunity to walk the talk.”

Another prominent PDP member who has voiced his disappointment over Buhari’s decline to assent the Electoral bill was former Governor of Ekiti State, Ayodele Fayose, who said that the President’s action can only mean he does not trust the judgment of his party members at the National Assembly that actively took part in the passing of the bill.

“What is President Buhari’s fear concerning this Electoral Bill? Can the interest of a single individual be placed above that of Nigeria and its people? Is he saying that even his party members in the NASS were wrong to have passed the Electoral Bill? May God save our country?” Fayose wrote on his twitter handle.

Meanwhile, some Nigerians have alleged that the real reason President Buhari declined assent to the Electoral Act 2018 Amendment Bill was to benefit from faceless voters who had no permanent voters cards (PVCs). One of those making the accusation is a former aide of ex President Goodluck Jonathan.

According to Reno Omokri, who made reference to a data by DeepDive Intelligence that is now circulating online, President Buhari won the 2015 Presidential election because over 13 million people with no PVCs voted.

“The real reason Buhari does not want to sign the Electoral Act is because 75% of the faceless voters who voted without PVCs in 2015, voted for Buhari. That is how he rigged the 2015 election. That is what the new Electoral Act will stop”[SIC], Reno said.

This is the fourth time President would decline assent to the Electoral Act 2018 Amendment Bill. Reasons for previous refusal had been hinged on errors in the document sent by the National Assembly.

According to the President’s Senior Special Assistant on National Assembly Matters (Senate), “President Muhammadu Buhari has taken decision on Electoral Act Amendment Bill 2018. In accordance with his power under the 1999 Constitution, he has communicated that decision to the Senate and House of Representatives, in accordance with the law.”

Enang was however unwilling to give specific reasons why the President withheld assent to the bill for the fourth time but only stated that Buhari has communicated to the National Assembly.

However, if Nigeria’s membership of the Economic Community of West African States is anything to go by, President Buhari would have breached the ECOWAS Protocol on Democracy and Good Governance. Article 2 of the protocol forbids member countries from making “substantial modification” to their electoral laws less than six months to elections “except with the consent of a majority of political actors”.