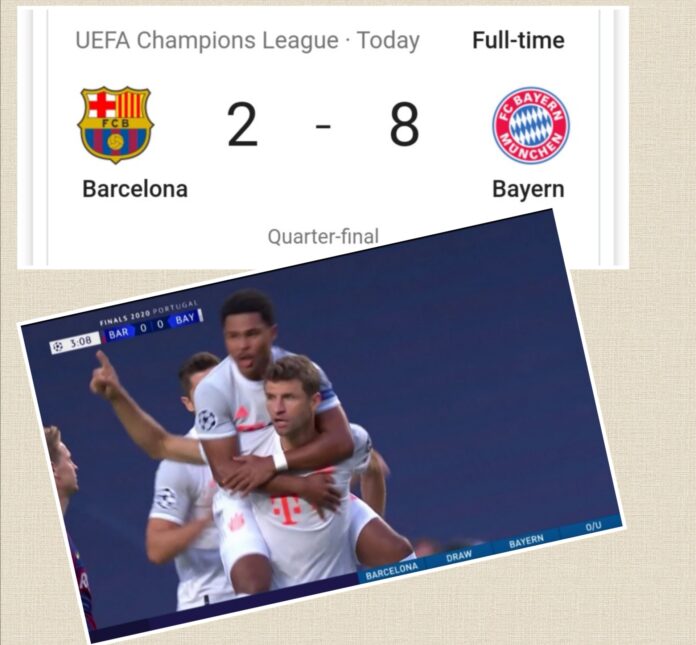 Barcelona defender Gerard Pique said radical changes were needed from top to bottom after his side were annihilated 8-2 by Bayern Munich on Friday to exit the Champions League in one of the Catalan side’s darkest ever nights, Reuters has reported.

“We feel devastated, although shame is the real word I’m looking for. We cannot afford to compete like this because it’s not the first, the second or the third time that something like this has happened,” a tearful Pique told reporters after the quarter-final drubbing, their worst ever result in Europe.

“This is very painful but I hope it serves some purpose.”

Pique, one of the surviving members of the team who won the Champions League in 2009 under Pep Guardiola to begin a golden era for the Catalans, said he was ready to leave the club in order to ensure they improve.

He also appeared to blame the Barca hierarchy, which includes president Josep Maria Bartomeu, for the team’s predicament as he called for changes at the very top.

“We all need to reflect deeply, the club needs lots of changes, I’m not talking about the coach, players – I don’t want to point the finger at anyone but the club needs changes on a structural level,” he said.

“If new blood needs to come for the club to change course then I’m not untouchable and I’ll be the first to leave if needs be, because it seems as if we’ve hit rock bottom.

“We all have to reflect about what is the best thing for the club and for Barca.”

Barca coach Quique Setien is unlikely to survive overseeing such a debacle, although he did not say whether or not he saw himself continuing in charge of the team.

NAPTIP justifies Its choice of Okunbo as 2020 anti-trafficking hero

“I’m not going to go into all that as I’ve only been here for six months but seeing as this is Pique, surely some of what he said is true,” said the coach.

“Right now we feel enormous frustration and all we can do is make conclusions and think about the future. Barca is a club that is so great that this will cause us a lot of damage and obviously some things will have to change.

“The truth is this is a tremendously painful defeat.”