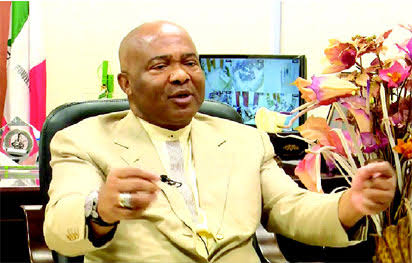 Imo State Governor, Hope Uzodinma has debunked reports that he rejected the final result of the Edo Governorship election which returned Godwin Obaseki of the Peoples Democratic Party (PDP) for second term as Governor.

According to a press statement by the governor’s chief press secretary, Oguwike Nwachuku, Uzodinma said he never made such a statement and blamed the fake news industry.

Emphasising the report as fake, Uzodinma accused one Stan Walden Newyork as the mastermind of the claims, a name referred to as “obviously a fake name”.

“If the authors of the fake reports still have some brain in their head, something would have told them that since Governor Uzodimma is neither from Edo nor Chairman of the APC Media Campaign Council, the mischief they were primed to accomplish will not fly. Of course they don’t have sense.

No doubt, the authors of the fake reports are obviously the same characters we have always known who have been signing off press releases using the name and Office of the Chief Press Secretary/ Media Adviser to give their criminal, selfish and foolish intent some measure of credibility.

The recent Edo State governorship election, like many others in the past involving Distinguished Senator Uzodimma, has provided them with yet another opportunity to feed the public with lies, lies and more lies, a vocation that seems to be their only known source of livelihood.

In their desperation to discredit Governor Uzodimma on the outcome of the Edo governorship poll, they have cast innuendos; insinuating that he has rejected the outcome of the governorship election and that he had accused the Independent National Electoral Commission (INEC) of being compromised, and that the All Progressive Congress (APC) will get judgment from the tribunal.

Their insinuation also includes that the governor said that the entire process was marred by irregularities from INEC officials who, they claimed, sabotaged the system.

Obviously relying on the position of Governor Uzodimma as the APC Deputy Chairman for the Edo Governorship Campaign Council, the criminal-minded writers of the irritating fake news did not stop at that. They had insinuated that the governor described the entire exercise as shameful.

If the authors of the fake reports still have some brain in their head, something would have told them that since Governor Uzodimma is neither from Edo nor Chairman of the APC Media Campaign Council, the mischief they were primed to accomplish will not fly. Of course they don’t have sense.

But they could not have advised themselves rightly because having been paid princely to discredit the Imo State governor, their sense of reasoning would automatically be blurred.

The hallmark of credible news report is the voice the writer adds to it and Reuters could not have published a report that dwells on hearsay like the one many may have been deceived to think emanated from that respected news medium, but we know, did not.

To also say that in the buffoonery, nay tomfoolery, of those who said Governor Uzodimma rejected the Edo governorship election result, they signed off with the name of the Chief Press Secretary/Media Adviser in a press release purportedly issued on September 19, 2020, but with a template that actually read May 20, 2020, tells a lot about their desperation to blackmail the governor and everything he stands for, using every opportunity at their disposal.

We have always known, since the coming on board of this administration, about the existence of stuntmen who maintain templates with which they pull off stunts mainly fake news, thinking they will derail the 3-R mantra vision of Governor Uzodimma. That, to us, is mission impossible because the governor knows where he is headed with Imo people.

Governor Uzodimma’s passion about taking Imo out of the woods, particularly from the grips of political hawks and merchants of blackmail whose umbilical chord seem tied to fake news and other negative tendencies that cause disaffection cannot be derailed.

He has refused to be distracted, even with the fake news that members of the public are fed with from time to time, because he is quite aware of the reason for them.

‘Politicians are not ready for free and fair elections’ – Sam...