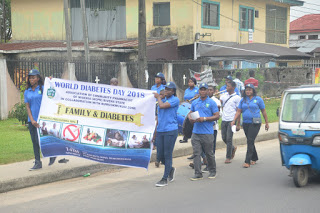 The International Diabetes Federation has urged families to learn more about the warning signs of diabetes. This was the call by members of the body around the world to mark Diabetes Awareness Month and World Diabetes Day 2018, which also held in across Nigeria last Wednesday.

In a statement, the body revealed that new research from IDF has discovered that parents would struggle to spot this serious life-long disease in their own children. Despite the majority of people surveyed having a family member with diabetes, an alarming four-in-five parents would have trouble recognizing the warning signs. One-in-three wouldn’t spot them at all. The IDF also said these challenges and recent findings underline the need for education and awareness to help people, particularly families, spot the diabetes warning signs early.

This year’s event was marked with the theme of Diabetes and the Family because the impact of diabetes on the family has been described as a big challenge to raising healthy children.

Since 1980 Diabetes cases have risen from 100million to 400 million people living with diabetes in 2018. In a television interview, a Lagos based medical doctor, Tuyi Mebawondu said: “as non-communicable disease, we are seeing a kind of pandemic of diabetes and its impact is essentially a burden on the family”.

Tuyi emphasized that parents ought to make it a priority to ensure every member of the family is tested for diabetes, including children. He stressed that early detection will help in the effective treatment and management of the disease. “The diagnosis of diabetes at the early stage is key because if you don’t pick it at the early stage you will pick it when life-threatening complication sets in” he stated.

“Our lifestyle has to change a lot. This is because as much as you want to alter your diet, as much as you don’t exercise, you smoke and live a sedentary life, the chances of having diabetes is higher” Tuyi said.

Again, diabetes has a critical impact on the organs of the body. It increases the risk of heart diseases, stroke and hypertension; in fact, it is the most common cause of blindness and amputation.  Unfortunately, treating diabetes is becoming more challenging and expensive placing a burden on the family”.

The medical doctor advises people living with diabetes to have lifestyle changes starting with their diet. He said “the more your weight increases the more the challenge of your body using sugar, especially in type 2 diabetes. Type 2 diabetes constitutes about 90% of diabetes cases all over the world”.

In his analysis, Tuyi explained that “the difference between type 1 and type 2diabetes is in their etiological factors, that is how they originate. Type 1 diabetes is what we call childhood-onset, which depends on insulin. In this case, the pancreas, the organ responsible for making insulin is not producing sufficient insulin”.

He further said that “In type 2 the usage of sugar at the cellular level is having challenge because the body is not taking in the sugar and as you know sugar is the biological fuel that the body uses to get energy.  So because most adults have loads of sugar in their system there could be a challenge for the body to take care of those sugars”.

HOW DIABETES IMPACT ON THE FAMILY

“It could be a big challenge to diagnose or quickly spot diabetes in children. One of the signs could be a mother having to change her baby’s diaper frequently, or a child not seeing properly. If there is a family history of diabetes then it is important to screen the children for diabetes” Tuyi said.

WHY WOMEN ARE MORE PRONE TO DIABETES

Tuyi also explained why women might be more prone to diabetes than men. He said “the disease has sex and age preference. For women, it could be because women are more likely to gain lots of weight or lifestyle peculiar to women. Also, when women pass through pregnancy, they pass through what is called gestational diabetes. So that puts a lot of load on the system to process sugar. There are about 400million people living with diabetes worldwide and about $1.2 trillion is being spent in terms of direct spending for treatment.

The theme for World Diabetes Day and diabetes awareness month 2018 and 2019 is The Family and Diabetes. A two-year time frame has been chosen to best facilitate planning, development, promotion, and participation. Materials and actions that IDF will develop over the two years of the campaign will aim to raise awareness of the impact that diabetes has on the family and support network of those affected. Also to promote the role of the family in the management, care, prevention, and education of diabetes.

Lekki Toll Gate: It’s clear there were casualties of gunfire –...